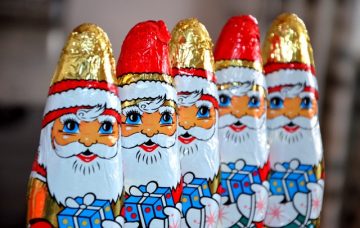 The school has apologised to parents after the kids were warned they could go to hell!

Primary school children as young as four were ordered to smash up chocolate Santas with hammers after learning he doesn’t exist.

Furious parents say their kids were left in tears by the bombshell dropped by a volunteer from a Christian charity at an assembly.

Rachael Cotton, headteacher at Fleet Wood Lane School in Lincolnshire, has apologised and promised not to work with the organisation again.

Although she denied that pupils were told Father Christmas isn’t real, parents say their children came to that conclusion based on what the charity worker said.

The volunteer, from the Mary Bass Charity, reportedly told youngsters to smash up their chocolate Santas so that they understood Christmas was really about God and Jesus, not just presents and sweets.

One mother of a four-year-old said: “My children said two children were asked to come to the front of the hall and smash chocolate Santas and reindeer with hammers to symbolise they were not what Christmas was all about.

“They were encouraged to do this by the offer that they could take the chocolate home afterwards, and were also told that if they didn’t believe in God and Jesus they would go to hell.

“Many of the children took that to mean that Santa was not real. My children were quite upset and we had to reassure them that he was and they would still be getting presents this year.”

Mrs Cotton said: “I have written to parents stating that some of the presentation by the Mary Bass Charity in a school assembly was inappropriate and assured them that we will not be using representatives from this charity again.

“We have apologised to parents and children and totally sympathise with their concerns.”

Mary Bass Charity spokesman Michael Griffin said: “We plan to meet to discuss this and take appropriate action when things are clearer.”

Was the volunteer wrong to get the kids to smash Santa? Leave us a comment on our Facebook page @EntertainmentDailyFix and let us know what you think!