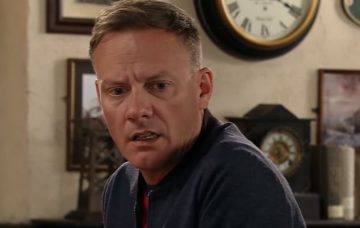 He's set to become homeless and an assault victim

Coronation Street’s Sean Tully has fallen on hard times recently and a new storyline is about to see him hit rock bottom.

It’s an upsetting fall from grace for the long-standing Weatherfield resident, who is usually one of the more comic characters.

However, the comedy turns to tragedy next week as things become a lot darker for him.

Sean’s fortunes begin to turn dramatically in scenes to air on Friday (15 June), when it’s revealed how cash-strapped he really is.

The usually bubbly character goes on a date to the bistro with Fiz’s mate Kim, and discreetly asks Michelle Connor if he can pay later as he is a little short of money.

However, at the end of the evening, Kim suggests they split the bill and Sean clearly panics.

Kim later overhears Sean explaining his predicament to Michelle and realises that he is completely broke.

In scenes that follow, viewers will begin to realise that Sean is in deep financial trouble.

Heartbreakingly, he is forced to live rough when Fiz asks him to move out.

With no other choice and too ashamed to ask anyone on Coronation Street for help, he ends up sharing a tent with a homeless woman.

In a horrible twist of fortunes, Sean is then viciously attacked by two thugs in a public toilet.

Shona Ramsay will find a broken Sean and try to help him, but will she be able to fix things for him?

At the time, he revealed: “It is a very unusual storyline, very serious, and not what people would expect from Sean. It will come good but it’s a very poignant and serious story.”

Do you think Sean should confide in his Corrie neighbours? Leave us a comment on our Facebook page @EntertainmentDailyFix and let us know what you think!