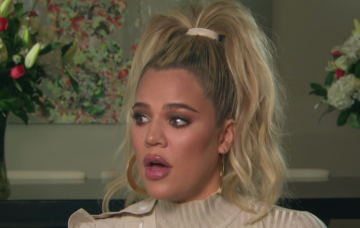 Nappy news during a tough week

Kris revealed the happy news on Twitter, reposting a video of Kendall Jenner with the caption, “BLESSED! Repost @Wmag When three of your sisters give birth in under a year. Congratulations @KhloeKardshian for welcoming another girl to the KarJenner clan.”

It was reported that Khloe, 33, had gone into labour at a Cleveland hospital on Thursday 12 March, just two days after video footage and pictures emerged of NBA player Tristan both kissing a girl, and her later leaving his hotel.

But after pictures revealed that Tristan HAD been allowed into the hospital when Khloe was giving birth, a US source has now told People magazine that the baby daddy is out of the doghouse…for now.

“Khloe is feeling nothing but happiness right now. She’s head over heels in love with her little girl – she is just consumed with love. Nothing else matters,” they said.

“She’s so happy that her baby is here – that she’s big and strong and healthy and beautiful. Right now, Khloe truly has no other cares in the world. She isn’t even mad at Tristan right now. She’s basically already forgiven him.

Everything that happened with Tristan is less about ‘cheating; and more like it was just a random, drunken hookup that meant nothing. It was the fault of stupid groupies trying to trap him and everybody just needs to move on.”

Yet Tristan could be on borrowed time, as Khloe’s baby bubble won’t last forever…

The source added, “She loves this baby so much, and this baby is one half Tristan. She loves Tristan. All is forgiven – for this precise moment anyway.”

Meanwhile, the ‘other woman’, thought to be Instagram model and strip club worker Lani Blair has made her Instagram account private in the wake of the media storm.

The pair were spotted kissing in a New York nightclub while Tristan was there with his team, the Cleveland Cavaliers.

She was later seen entering his hotel room, before leaving at 8pm the next day, although the source revealed how Tristan has told Khloe it was nothing more than ‘kissing’.

But it looks as if Tristan is off the hook for now, although it’s yet to be seen whether Khloe will remain in Cleveland after she leaves the hospital.

She’s currently living at Tristan’s house after relocating there to have a more ‘peaceful’ latter part of her pregnancy and birth.

The Karadshian clan reportedly flew to join her when her contractions started and whether Khloe returns home or not, it’s likely that Kris will be there to support her in the first few weeks, as she has been when he other daughters have given birth.

A name is yet to be announced but we’re hoping for something starting with a ‘K’.

Do you think Khloe made the right decision to ‘forgive’ Tristan? Leave us a comment on our Facebook page @EntertainmentDailyFix and let us know what you think!