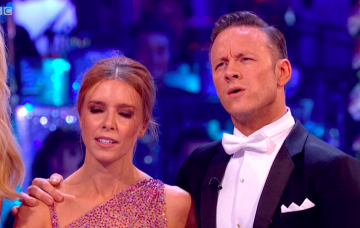 There’s no denying things are getting tense as we hurtle towards the final of Strictly Come Dancing – and it looks like the stress is getting to one of the professional dancers in particular.

She is beauty, she is grace – a gorgeous routine from Kevin and Stace! 😍🌸 @StaceyDooley @keviclifton #Strictly pic.twitter.com/t2e6jptpwc

The incident happened in the second half of the show as the semi finalists performed their Viennese Waltz.

Their first dance, as the show opened, went smoothly, as Stacey, 31, performed the Charleston to universal praise from the four judges.

Shirley Ballas called it a “superb way to open the show,” adding that is was “absolutely phenomenal”.

Their second dance though, was more divisive, with Bruno Tonioli telling the BBC3 presenter to watch her hands.

He added though, that it was “wonderful” and “exquisite.”

But when host Tess Daly asked Craig for his feedback, he scolded: “I thought, for me, a dance of two halves. I felt the first half of it was an American Smooth instead of just a Viennese Waltz. And the second half was a pure Viennese Waltz.”

Kevin, 35, looked confused and then annoyed as he tried to interrupt.

Craig kept going, saying: “I mean, the challenge, of course, in a Viennese Waltz is the fact that you have to keep the rotation going and the same steps going, on and on, which was why you get giddy…”

To the shock of viewers watching at home, he added: “I felt like that was cheating – a little bit.”

The audience booed in shock, as Kevin covered his mouth clearly annoyed, before trying to explain that the dance needed an “entrance and an ending”.

Craig ignored his comments, adding: “However beautiful it was. I loved it when you actually got into the hold. I just wanted to see a bit more of the true Viennese.”

He then took to Twitter to thank fans who defended and praised their dance, also directly addressing his hardworking partner, writing: “I’m so proud of you @StaceyDooley. We’ve done everything we can. What will be will be. Well done superstar☺️.”

Twitter was outraged at Craig’s accusations, with one commenting: “No no no @CraigRevHorwood @keviclifton does not cheat! Exquisite! #Strictly.”

I’m so proud of you @StaceyDooley . We’ve done everything we can. What will be will be. Well done superstar☺️

Another added: “Loved Kevin Clifton’s face during Craig’s critique. Total confusion. Stacey Dooley epitomises what #Strictly is about. I hate the use of ‘journey’ so I’ll just say that her learning experience has been incredible and they’re amazing to watch #StrictlyComeDancing.”

A third blasted him: “That did not resemble an American smooth in the least, Craig. I’m baffled. That Viennese waltz was beautiful. Stacey is a better dancer than Faye in my opinion. Get over it and give everyone the marks they actually deserve. You petty little man. #strictly.”

A fourth furiously tweeted: “Craig did not just accuse Stacey and Kevin for cheating in that dance😤😒If anyone is cheating it’s Ashley by just purely being in this show🤔#strictly.” Another added simply: “Craig is making me cross tonight.”

Did you agree with Kevin or Craig? Leave us a comment on our Facebook page @EntertainmentDailyFix and let us know what you think.