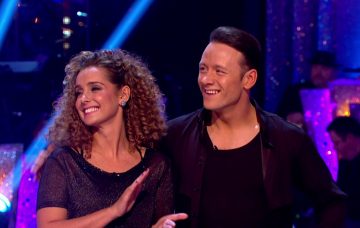 They are still close

They have stayed friends since being partnered on Strictly Come Dancing, but now Louise Redknapp and Kevin Clifton have reignited talk of romance between them.

Fans think they may be more than pals after they had Christmas dinner with Kevin’s parents this week.

Louise, 44, was pictured with the professional dancer and his parents at the annual Christmas ball they host in their hometown of Grimsby.

They were all smiles as they stood together and posed for pictures at the bash.

The pair grew close during Strictly 2016, soon after the show finished both their marriages ended.

It’s believed the picture was taken this weekend, now that Kevin, 36, has some down time after winning the show with journalist Stacey Dooley.

Fans voiced their excitement at seeing Louise and Kevin together again.

According to The Sun, one wrote: “I hope Kevin and Louise are happy if they are together.”

Another added: “Wow! Bit of a shock!”

They still hang out since their Strictly days, with Louise attending Kevin and Karen’s dance tour.

Kevin and Louise have never confirmed a romance. But when they formed a bond on Strictly, Louise’s now ex-husband Jamie was said to reach out to Kevin’s then wife Karen Clifton.

According to The Sun’s source, Karen told Jamie at the time: “Keep your wife away from my husband.

Louise and Jamie filed for divorce in December 2017, while Karen and Kevin announced their separation in March this year.

Could a romance be on the cards for Christmas?

Do you think Louise and Kevin would make a good couple?  Leave us a comment on our Facebook page @EntertainmentDailyFix and let us know what you think!