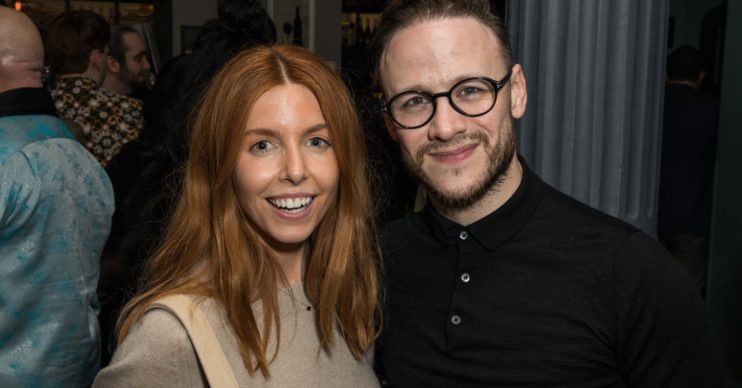 Fans got an insight into their lockdown life

Kevin Clifton and Stacey Dooley have admitted they are living “like a pair of students” in lockdown – and Kevin said his mum would be “furious” to find out.

Stacey appeared on Saturday Kitchen joining in the Food Heaven and Food Hell section of the show.

Matt Tebbutt asked what she had in her fridge to inspire him to make a dish  – and Stacey could not resist using the the opportunity to tease Kevin.

At the beginning of the show, Stacey said: “Basically I’m the worst guest ever.

“Essentially I haven’t left the house so I was just rattling around the fridge and I have halloumi, a sweet potato and some capers.

My mum’s going to be furious if I’m on your show looking all scruffy.

“But I went this morning to the fridge to fetch the ingredients and the halloumi has disappeared. It’s either Kevin or the quarantine mice.”

Kevin on the spot

Kevin had to reluctantly join Stacey on screen in order to defend himself over the missing halloumi.

Later, when Matt revealed the curry had won the vote, he asked Stacey: “What did Kevin do with this then?”

“Kevin, what did you do with the halloumi?” Stacey called out to her boyfriend.

But Stacey was not convinced that easily.

“He’s saying he didn’t eat the halloumi so it’s the greatest mystery,” she said.

The former Strictly dancer had yet to make an appearance on the screen so Matt asked: “Is he hiding?”

Poor Kevin was avoiding the camera because of how he was dressed, and not a guilty conscience over the Greek cheese, it emerged.

Appearing on camera, he confirmed: “My mum’s going to be furious if I’m on your show looking all scruffy.”

“We’ve been like a pair of students, going to bed later, getting up late,” Stacey revealed.

Well, we don’t think you are the only ones who has let their style slip during quarantine – we just want to know what happened to that halloumi.

What did you think of this story? Are they a typical lockdown couple? Go to our Facebook page @EntertainmentDailyfix and leave a comment to let us know.