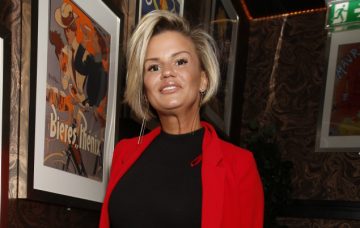 Kerry Katona has admitted she’s “so happy” to have put weight back on after she suffered a severe sickness virus earlier this month.

A couple of weeks ago, Kerry revealed she had become ill with Norovirus, which left her “feeling like skin and bones” as it made her lose weight.

The star took to Instagram on Friday to share a snap of herself in her underwear as she told fans she feels like she looks “so much healthier” since recovering from the illness.

So pleased I put the weight back on from when I was poorly!! I look so much more healthier @parkplaza

Kerry captioned the post: “So pleased I put the weight back on from when I was poorly!! I look so much more healthier.”

Fans were quick to comment on the snap, with many gushing over how great she looked.

Another wrote: “Kerry you look bloody fabulous!” while a third added: “You look amazing, go girl.”

Earlier this month, Kerry told her followers she had “never felt so poorly” after falling ill with Norovirus.

The mum-of-five shared a series of photos of herself in bed, joking: “Graphic warning not a pretty sight!!”

She continued: “Been hit by a severe sickness virus!! Feel like skin and bones!!!!!! I am not ignoring people I’m just extremely poorly, don’t think I’ve ever been so poorly!!!!”

She added: “So was driving my car and threw up all over myself!!!!”

But just hours later, Kerry shared her dismay after being trolled for posting the pictures of herself.

Graphic warning not a pretty sight!! Been hit by a severe sickness Virus!! Feel like skin and bones!!!!!! I am not ignoring people I’m just extremely poorly 🤢🤮🤢🤮🤢 don’t think I’ve ever been so poorly!!!! So was driving my car and threw up all over myself!!!! If anyone knows of any Mobile car valeting please dm!!!! Xxxx

Kerry shared more images of herself, focusing on her stomach, saying she wasn’t happy to have lost weight while sick.

She said: “I have been stuck down by the Novovirus, wouldn’t wish this upon my worst enemy, feel like a shadow of my former self!!!

“Really don’t like being this skinny, it’s not a healthy look!!!! I’ve taken pics so people can see how severe this bug is and that I have not intentionally lost this much weight purposely!!!”

She added: “Regards to the weight loss, which is completely out of my control… was only showing how severe this illness has been and I wouldn’t wish it upon anybody.

Kerry concluded her rant: “But for those who don’t have a sad life and have sent me well wishes thank you…. the rest of you small minded people, please unfollow and take your negativity and shove up your hole!! Amen.”

Have you ever experienced Norovirus? Leave us a comment on our Facebook page @EntertainmentDailyFix and let us know your experience.