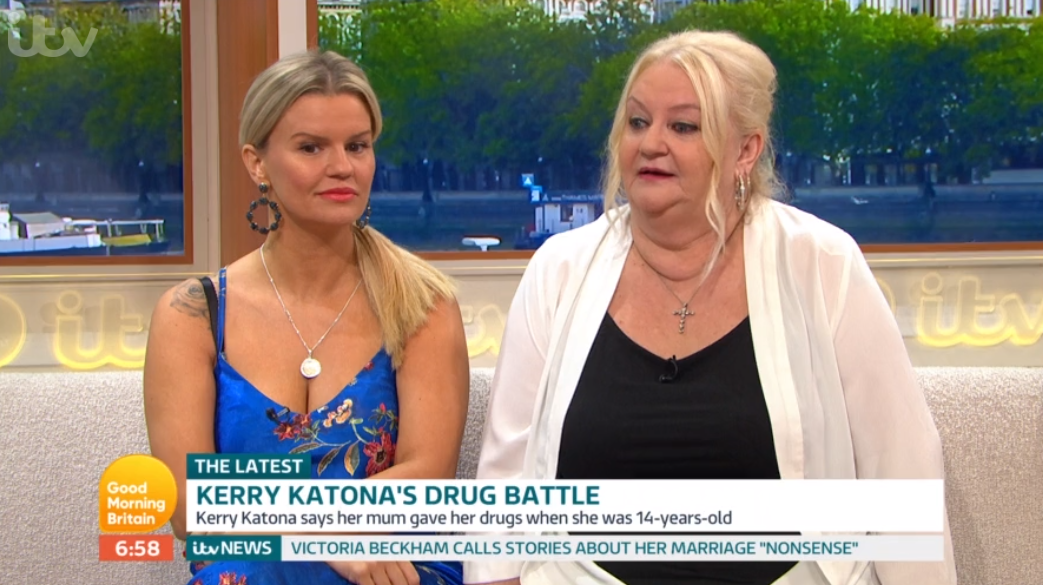 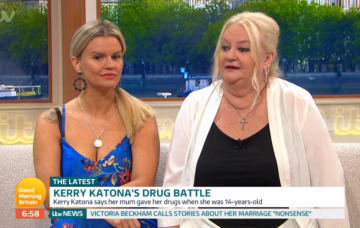 She gave her daughter speed but said it was sherbet

Kerry Katona’s mum has spoken candidly about giving her daughter drugs when she was 14, acknowledging it was “dangerous” and “unforgivable”.

The former Atomic Kitten singer, 37, and her mum Sue appeared on Tuesday’s Good Morning Britain for their first joint TV interview to mark nearly ten years of Kerry being clean from drugs.

Sue explained that she gave Kerry speed when she was just 14, telling her daughter it was sherbet.

Sue told hosts Piers Morgan and Susanna Reid: “It’s not a nice thing that I done, it’s embarrassing, it was silly, it was dangerous, it was unforgivable but I wasn’t in the right frame of mind. I can only say I was off my head when I done it.

“I worked in a pub and I thought it would be fun. She was my mate, not my daughter. It was totally, totally wrong.”

Piers asked Sue if she felt guilty about watching her daughter’s later problems with drugs over the years, to which Sue said: “Oh God, yes. I was scared for her.

“Even though I was scared for her, I was still doing drugs myself. I can’t even explain what it was.”

‘She was my mate not my daughter’ says the mother of Kerry Katona. She has opened up about giving her 14-year-old daughter Speed which she pretended was sherbert. pic.twitter.com/B6aH1iEMny

Kerry, who is a mum to five children, interrupted: “My mum had a lot of mental health issues as well. My mum had a really bad [childhood]. I’m not defending what my mum did. I could never do that to my children. But I broke the cycle.”

“My mum had a terrible upbringing,” she added.

On her childhood, Sue continued: “It’s not an excuse, my past, of what I did to Kerry. If anything, it should have taught me not to do it to Kerry, because it was done to me.

“So you’d have thought I’d have had more sense in not to do it to my daughter.”

Kerry admitted that she would have likely taken drugs anyway, whether or not Sue had given them to her, because of the “people I was surrounded by”.

She added: “I thought it was normal. That’s my thing. I thought people who didn’t do drugs were snobs. That’s how it was for me. I didn’t know any better.”

Talking about the effect the drug her mum gave her when she was a teen, Kerry explained: “I was living with my foster parents at the time and I remember going home and lying in my bed and going, ‘Oh my God, I can’t go to sleep’.

“But everybody we were with in the pub was having such a wonderful time and for me I wanted to be a part of that. So it became my normality.”

Kerry said taking drugs was her and her mum’s “little thing that we did together” and it almost felt like “getting my mum’s approval of love”.

The star explained that she then started taking cocaine when she was 17 and her drug addiction “spiralled out of control” from there. Her mum did not give her the cocaine.

Speaking about what helped her overcome her addiction and the dark times in her life, Kerry said: “I’m very stubborn as well and I won’t be defeated. I think there’s something inside of me.”

‘I thought people who didn’t do drugs were snobs,’ says Kerry Katona.
The reality star has opened up about her battle with addiction, saying she thought substance abuse was ‘normal’. pic.twitter.com/NwFiATMBZD

On her relationship with her mum when she was younger, Kerry said: “I was the mum and my mum was the daughter. I always looked after my mum. I won’t change anything from my past.

“I always say to my mum, ‘Own it’, which is what I’ve done. I’ve made mistakes in my life, luckily enough my children have never witnessed anything. But I will own my mistakes. I won’t play a victim, I’m a survivor. I will take responsibility for what has happened. Nobody forced me to do anything. It’s made me who I am today. I’m not saying it was right what happened.”

Both Kerry and Sue will mark 10 years of being sober next year.

Good Morning Britain airs weekdays at 10.30am on ITV.

What did you think of Kerry and Sue’s comments? Leave us a comment on our Facebook page @EntertainmentDailyFix and let us know what you think