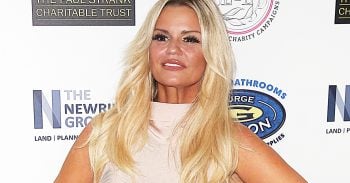 Posh called the star when she split from Brian McFadden

Kerry Katona has revealed that Victoria Beckham helped her through her split from first husband Brian McFadden.

Speaking in her New! magazine column, Kerry revealed that former Spice Girl Victoria found her number and gave her a ring.

“When Brian and I split she called to wish me luck,” the 38-year-old mum of five said.

“The Rebecca Loos scandal had just happened, yet she got my number and made that gesture,” added Kerry, referring to David Beckham’s former PA, who claimed she’d had an affair with the footballer.

And it seems the Beckham family have such a fan in Kerry that she’d even let one of her eldest daughters – 17-year-old Molly and 16-year-old Lilly-Sue – date one of the Beckham boys.

“My girls haven’t had a boyfriend yet,” Kerry said, adding: “That said, if one of the Beckham boys asked them out, I’d be thrilled.”

She added: “In fact, I’d make them get married and scrap the pre-nup! I’d love to be in-laws with Posh!”

Speaking to OK! magazine this week, Kerry also revealed that she would love to be the “next Kris Jenner” and have a Keeping Up With The Kardashians-style show of her own.

“I’d love my own reality show with my kids,” she said.

Do you think Kerry would fit in with the Beckhams, should their kids marry? Head over to our Facebook page @EntertainmentDailyFix and let us know!