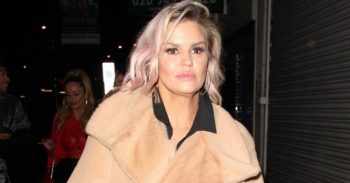 Her ex passed away last week

Grieving Kerry Katona has reportedly dashed to see the parents of her late ex-husband George Kay.

The Atomic Kitten star was given the awful news that her former partner had passed away last weekend.

According to The Sun Online, Kerry has made the 250 mile journey to comfort George’s parents in Cheshire.

The 38-year-old reportedly travelled from her home in East Sussex to George’s family home in Warrington on Monday.

The publication claims Kerry, who has four-year-old daughter Dylan-Jorge with her ex, made the journey to help console George’s mum Hilary and his dad Alan after the tragedy.

Kerry’s representative declined to comment when contacted by Ent Daily.

The Mirror newspaper claimed at the time: “Kerry was told this afternoon that George suffered an overdose and was taken to hospital, but was declared dead on arrival.

“No one yet knows what he overdosed on or whether it was intentional or an accident.

“Kerry is heartbroken, he’s DJ’s dad and she loved him once.”

Before news of George’s death broke, Kerry posted a sweet video of Dylan-Jorge dancing on Instagram.

Read more: Kerry Katona’s daughter Molly slams claims that her mother has ‘blood on her hands’ after ex-husband George’s death

The source continued: “She can’t bear the thought of explaining to her daughter what has happened. She’s devastated. Kerry loved George once and, while she’s not had contact with him for a long time, it is a huge shock.

“Her younger kids, Max and Heidi, who she had with Mark Croft, loved George too and called him Dad. She has no idea what to tell them.”

Kerry and George married in 2014 but they split in October 2015, after 11 months together.

They then decided to reunite and give things another go but they separated again in 2017.