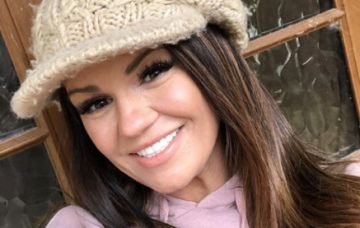 The phrase ‘like mother, like daughter’ sprung to mind when Kerry Katona uploaded a photo of her and one of her offspring enjoying an afternoon together yesterday.

Former Atomic Kitten singer Kerry, 37, took to Instagram to share the happy snap, which showed her trying on dresses with her 15-year-old daughter Lilly-Sue.

And her fans were gobsmacked by how much the teenager looks like her mum, with many commenting on the amazing likeness.

Kerry has five kids in all, but it was her second oldest – one of two children she had with former Westlife star Brian McFadden – who joined her on this particular occasion.

We don’t know what event they were trying on outfits for, but the two ladies looked in their element as they sported snazzy dresses.

Kerry captioned the pic: “Playing dress up with my @lils.mc. OMG she’s getting so grown up!!!!!”

Plenty of her fans agreed with that sentiment, remembering Lilly-Sue’s birth like it was yesterday (it was actually 2003).

But plenty more were startled by the family resemblance. One fan gushed: “Wow she is your double xx.”

Another agreed, writing: “She looks the image of you Kerry.”

And a third said simply: “Peas in a pod.”

Lilly-Sue’s dad, Brian McFadden, is dating PE teacher Danielle Parkinson these days, and last month Entertainment Daily revealed that Lilly-Sue and her older sister Molly, 16, are desperate for their father to tie the knot.

Kerry approves of Brian’s choice of partner, too. She recently told OK! magazine: “Danielle is an absolute diamond. Molly and Lilly idolise her – I think they prefer her to Brian! She’s too good for him!”

As with a lot of mums, the former singer has a great bond with her daughters. And last year, Kerry posted a jokey Instagram video in which she bemoaned Molly’s decision to move to Ireland to study.

Looking dishevelled, she whimpered to the camera: “My baby girl having cuddles with Mummy tonight. I don’t want her to leave me!

Kerry also has an 11-year-old daughter, Heidi, and sons Maxwell, 10, and Dylan-Jorge, four.

Do you think Kerry and Lilly-Sue look alike? Have your say on our Facebook page @EntertainmentDailyFix!