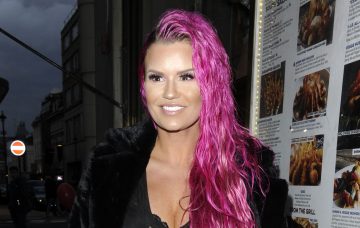 She says she feels "amazing."

She shared an old photo of herself wearing a pink bikini, taken shortly after the birth of her daughter, Dylan Rose.

Alongside the old image was a recent photo, showing Kerry from the back, dressed in a lavish ballgown.

I am absolutely thrilled to be part of @skinnyrevolutionuk Losing weight has boosted my self confidence and I feel utterly amazing. If you have tried everything and can’t shift those extra pounds / kgs please try @skinnyrevolutionuk and watch you transform into the the god/ goddess you deserve to be!! Call 08000842159 #ad #transform #toned #healthy #weightloss #amazing

The former Atomic Blonde singer is often open about the work she puts in to stay fit – she trained hard over the last couple of years, including an intense, week-long bootcamp last July.

After the end of her marriage to George Kay, the singer has dedicated herself to becoming stronger and more fit.

Speaking to OK! Magazine last year, she claimed that herbal supplements helped her stay fit, along with a variety of exercise programmes.

“[I] do pilates and weights and yoga. I feel fitter than ever and I look great,” she said.

The singer has also admitted to going under the knife to get things started, tweeting about her recovery from liposuction.

Kerry is about to appear on UK screens in the new series of Celebs Go Dating, after a new romance proved short-lived last year.

Prior to her marriage to George, she was married to Westlife star Brian McFadden, and cab driver, Mark Croft.

What do you think of Kerry’s new look? Leave us a comment on our Facebook page @EntertainmentDailyFix and let us know what you think of this story.