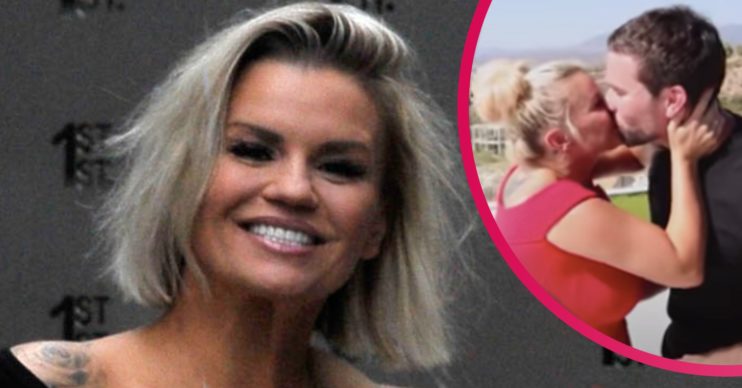 Kerry burst into giggles as he popped the big question

The fitness trainer, 32, asked Kerry, 40, to marry him on her birthday.

Sharing all to YouTube, the former Atomic Kitten singer burst into giggles as he popped the question.

Clearly taken off guard, she fell to her knees and covered her mouth with both hands.

She went on to joke: “Are you sure? You know my track record, right?

He replied: “I’ve been thinking about it the last few hours upstairs! I’m sure!”

Kerry says getting married is the ‘natural process’

Four of Kerry’s children then stepped forward to hug Ryan.

They went on to enjoy a family meal at their luxury Spanish villa they are renting for their family holiday.

She asked Ryan when he wanted to get married and he said in a couple of weeks.

“A couple of weeks? Where do you want to get married?” a surprised Kerry asked.

Ryan said: “Where? Vegas! It’s got to be Vegas hasn’t it…definitely Vegas!”

The couple then high-fived. Kerry added that everything felt right.

“It feels like this is how it should be. It’s the natural process,” she said.

“The ring is phenomenal. But it feels like the natural step to take after two years.”

She later video-called her mum, Sue.

Sue said: “It’s the most beautiful ring isn’t it? I wish Ryan was marrying me!

“He called me for about an hour about it.

“I had no scary feeling, no jelly belly – I am just so happy.”

Ryan and Kerry met through the dating app Bumble, and began dating in 2018.

They were reported to have broken up briefly after four months together – but since they made up they’ve been going solid.

One viewer wrote: “Congratulations Kerry you deserve a good guy this time.”

A second viewer gushed: “Aaah I’m so happy for you both. You deserve so much happiness.”

And a third viewer praised: “I am so happy for you both Ryan seems like such a nice genuine person. Very patient with your children. Congratulations.”