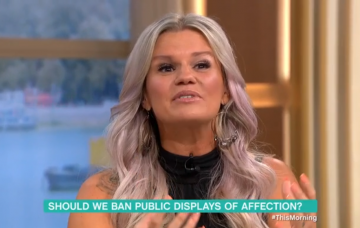 She split from Ryan Mahoney after a make-or-break holiday

Kerry Katona has admitted seeing The Duke and Duchess of Sussex putting on a loved-up display during their royal tour has given her “hope” she’ll meet Mr Right.

Kerry appeared on Tuesday’s This Morning to discuss whether public displays of affection should be banned after the royal couple were pictured packing on the PDA during their tour in Australia and Fiji.

Defending Harry and Meghan’s choice to hold hands and cuddle in public, Kerry said: “They’ve only just got married!

“It gives us divorcees hope. I think it’s about time we see the royal family be affectionate. I would give anything to see Prince Philip give the Queen a bit of a tap on the tushie.

“It gives me hope. Meghan has done what all girls dream of doing since Disney films.

“I don’t think she’s acting. It’s the first time she’s been pregnant. She’s in the honeymoon period. They’re all loved up. I’ve done it several million times so I understand.

“Millions of us tuned to watch their first kiss, so what’s the difference now?”

The mum-of-five continued: “I’d think there is something wrong if I was married and they didn’t want to hold my hand or give me a kiss.

Eamonn Holmes’ wife Ruth Langsford then joked: “Get off my husband!” to which Kerry said: “Sorry, Ruth.”

A photo then popped up on screen showing Ryan and Kerry sharing a kiss during their Thailand getaway.

Laughing, Kerry said: “I don’t do that on purpose, that is in my own private time. I love affection.”

As Eamonn and Ruth started to jokingly bicker with each other, Kerry quipped: “Listen, if you need a good divorce lawyer I know one. I should be a divorce lawyer myself!”

Following the debate, Kerry – who has been married three times – took to Instagram to say she’s “hopeful” she’ll have a “beautiful and loving marriage” like Eamonn and Ruth one day.

Alongside a selfie, she wrote: “@thismorning @eamonnholmes @ruthlangsford hopefully one day I’ll have a beautiful and loving marriage like these!!! Can’t say I haven’t tried!!”

Kerry’s appearance on This Morning comes hours after it was reported she and Ryan had broken up.

A source told The Sun that the pair decided to end their relationship after landing back in the UK from their holiday in Thailand.

@thismorning @eamonnholmes @ruthlangsford hopefully one day I’ll have a beautiful and loving marriage like these!!! Can’t say I haven’t tried!! 😂😂😂😂

What did you think of Kerry’s comments on This Morning? Leave us a comment on our Facebook page @EntertainmentDailyFix and let us know what you think!