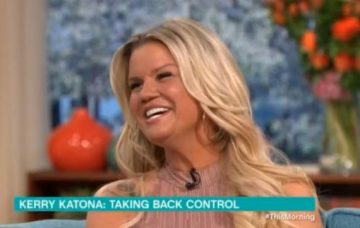 Kerry Katona and Phillip Schofield joke about that ‘slurring’ interview

The This Morning interview back in 2008 made headlines

Kerry Katona proved she’s put *that* infamous slurring moment on This Morning firmly behind her as she poked fun at the incident during a return visit to the show on Monday.

The former Atomic Kitten star, 38, made headlines back in 2008 when she appeared to slur her way through an interview with Phillip Schofield, prompting him to call her out on live TV and ask if she was okay.

Kerry appeared on ITV’s This Morning on Monday to talk about throwing her support behind a mental health campaign, which led Holly Willoughby to ask Kerry where she is right now.

“At This Morning!” quipped Kerry, causing Holly and Phil to giggle.

Phil then referenced the infamous 2008 interview by joking: “That’s a big step forward from last time!”

Kerry burst into laughter, agreeing: “I didn’t know where I was last time, Phillip!”

Kerry and Phillip’s interview on This Morning ten years ago sparked major headlines after Kerry appeared to slur and Phil outright asked her on air if she was okay.

He said: “If I’m honest now, you don’t seem right to me sitting here now… Your speech is a bit slurred.

“I am merely pointing out what everybody watching… Our phone has already gone in the gallery from people up in ITV asking if you’re okay. I’m only voicing what everybody is thinking.”

Kerry insisted it was just because she’d taken medication the night before to help her sleep, which can affect her speech.

The star, who has spoken openly about her past drug use and cleaning up, said on Monday’s show: “I’m in a really good place and I’m not just saying that. I think being single for a year… for me, it was always about being in a relationship and trying to create the family I didn’t have as a child.

Kerry added she’s proud of her journey from rock bottom to where she is now.

“Credit where credit is due, I’m not ashamed or embarrassed to give myself a pat on the back,” she said. “I think I’ve done well to overcome it.”

Kerry found fame in band Atomic Kitten at just 18 and won I’m A Celebrity… Get Me Out Of Here! but she’s as famous for her troubled personal life as her professional life .

She’s now been clean for ten years and using her experience to help others.

The star is supporting the ‘You’re Not Alone’ campaign, which urges anyone experiencing difficulties to reach out and talk about it.

She told Phillip and Holly: “I could sit here and blame my mum for my childhood, blame my second husband, blame everybody else and become a victim. But I’m not a victim, I’m a survivor and I’ll take responsibility for the majority of things that have happened to me.

“Nobody forced me to take drugs or get in these relationships. It was my decision and I have to take responsibility for that otherwise I could be stuck in the past hating This Morning for doing that interview with Phillip, hating everybody else. It was nobody else’s fault.

“It was my life, my situation. Obviously people contributed to me being in the state I was but ultimately it was my life and I have to own that and accept it and move on and I’m in a good place now.”

Did you watch Kerry on This Morning today? Let us know what you think on our Facebook page @EntertainmentDailyFix.