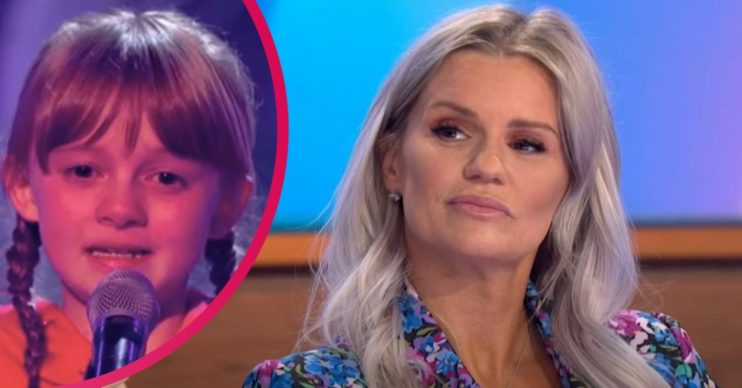 Kerry Katona has opened up about her daughter Heidi and her struggles with anxiety.

The mum of five, praised her daughter, 13, as she made it through to the next round of the The Voice Kids.

However, it was touch and ago, as Heidi was a bag of nerves, and burst out in tears after her performance.

But her voice alone was enough to impress the judges, and Paloma Faith offered to be her mentor.

Rushing to the stage to comfort Heidi, Paloma embraced her and praised her singing voice.

Heidi wowed the judges with her performance of Macy Gray’s I Try.

Will.I.Am was the first to swivel his chair, but ultimately Heidi chose Paloma to be her coach.

Kerry could be seen jumping for joy backstage along with two of her other children – Dylan and Max.

Taking to Instagram soon after, she elaborated on just how nervous Heidi had been.

“She was so nervous”

Sharing in view of her some 609,000 followers, Kerry wrote: “Soooooo bloody proud of my baby girl @heidikatona she was so nervous but she didn’t quit.

“Heidi gets really bad Anxiety so to see her do something so big and face her fear, I couldn’t be prouder xxxxx.”

Read more: The Queen looks ‘so pretty’ as new royal portrait is unveiled

“I’m in bits. Love you xxxxxxx you’re my hero xxxx.”

Coleen Nolan commented: “OMG I was crying with you! Amazing thing to do so so brave and so good! Yay go Heidi!! xxxxx.”

One fan gushed: “She genuinely gave me goosebumps, beautiful voice.”

Another posted: “I’m a mummy too… I cried at you crying! She was amazing.”

And a fourth user congratulated with: “You must be so proud! She was fab. When I cry I can’t even talk never mind sing like that.”

Kerry’s close friend, Katie Price, had praised Heidi’s singing abilities in the past.

But she’s also poked fun at Kerry’s apparent lack of singing talent – despite having been in a top girl group Atomic Kitten.

Katie said on Flex FM radio last year: “I always take the mick out of Kerry and say, ‘Kerry you can’t even sing!’

“I tell you what though, I’m joking Kerry, her daughter Heidi is absolutely amazing at singing. Her and Princess together, she is a little star in the making.”