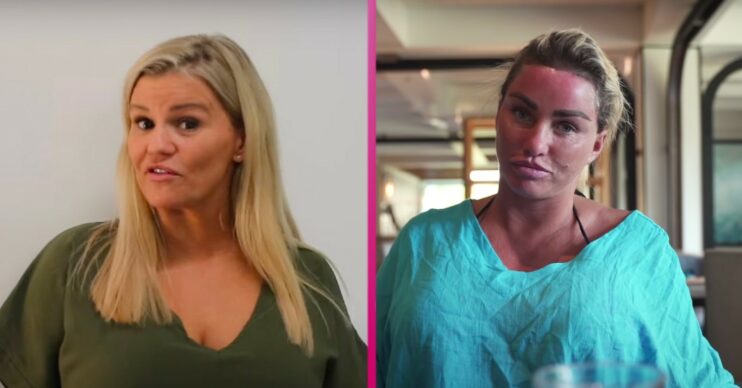 Kerry Katona has taken a swipe at Katie Price as she made a comment about the former glamour model’s appearance.

The 41-year-old recently shared her thoughts on Katie’s new boobs, saying “they’re not my cup of tea”.

Katie has recently returned home from a three-week holiday in Thailand, which saw her undergo something of a transformation.

As well as getting a new bunch of new tattoos on her arms, the star reportedly underwent her 14th boob job too.

Read more: Kris Boyson ‘reaches out’ to Katie Price with sweet words about her son Harvey

They’re believed to be her biggest boobs yet.

However, Katie’s friend, Kerry, doesn’t seem to be a fan of the 43-year-old’s new boobs, saying “they’re not my cup of tea”.

She now runs the risk of falling out with Katie.

What did Kerry Katona say about the star’s new look?

The 41-year-old discussed Katie’s new look in her latest column for New Magazine.

“I saw some pictures of my pal Katie Price while she was on holiday in Thailand and I must admit her boobs are not my cup of tea,” she wrote.

“Back in the 90s, big boobs were the thing, but for me the itty-bitty titty club is the way forward,” she continued.

“I want my boobs to be smaller. Katie, I love you and I wish you nothing but the best.”

Katie has yet to respond to her long-time friend’s comments about her new look.

Kerry and Katie have been friends for years, with Kerry even being a bridesmaid at Katie’s wedding to Peter Andre in 2005.

Kerry’s comments come amid rumours that Katie and Carl Woods have called time on their relationship.

They recently jetted off to Thailand together for three weeks, and Katie was at his side during a recent court appearance.

However, it has since been reported that the couple has split. Carl is believed to have accused Katie of cheating.

Carl reportedly “lashed out” via text at Katie after believing that she cheated on him.

“He branded her ‘a cheat and a player’ and told her he has had enough. He feels he can no longer trust her and it’s the end of the road,” a source told The Sun.

Carl has also deleted pictures of Katie from his Instagram. However, he still follows her.