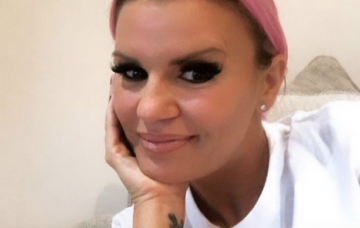 She’s been guiding Gemma with meditation and happy thoughts

Dancing On Ice star Gemma Collins is being advised by Kerry Katona on how to soothe her anxieties, according to a report.

Kerry, 38, is said to have introduced The GC to the healing powers of crystals and meditation as she bids to keep calm and carry on during her eventful stint on the ITV skating show.

The Mirror reckons Gemma, also 38, met up with Kerry behind the scenes as the Atomic Kitten singer gave her support to her ex Brian McFadden, dad to two of her children.

An unnamed pal of Kerry’s is quoted as telling the news outlet that she is keen to help the divisive TOWIE cast member by selecting crystals for her that will help ease the pressures of being in the spotlight.

Read more: Aston Merrygold picks his 12-month-old son to be his best man!

“It sounds a bit woo and wacky, but Kerry’s obsessed with meditating and yoga and it’s helped her so much with her stress and anxiety,” they are reported as saying.

Additionally, Kezza hopes to help banish any self-doubt Gemma may have and restore her confidence as she continue to suffers online abuse from trolls.

And it seems former Queen of the Jungle Kerry has been using FaceTime to help spread some positive vibes, guiding Gemma with meditation and happy thoughts.

It is claimed the friend said: “Kerry holds the crystal to her heart and says the affirmation for Gemma. Different stones and colours help with different areas of life.

“Kerry feels she has so much wisdom to share with Gemma.”

Despite coming in for criticism from viewers, judge Jason Gardiner and hosts Phillip Schofield and Holly Willoughby, The GC has defied expectations to remain on the show.

That’s despite splatting on the ice in spectacular fashion a couple of weeks ago and claims that she ‘faked’ the dramatic tumble.

She’s also been accused of faking tears and kicked out of rehearsals for being a distraction when filming herself for social media.

However, Gem looks to be in rare form for tonight’s show – and recently celebrated her improving skating skills with a shimmy on the ice.