"They wasn’t going to let me on!" revealed disbelieving star

It seems Kerry Katona has experienced yet more drama at an airport after she was apparently “pulled aside” by flight officials as she tried to board a plane earlier today.

The 38-year-old looks to have been heading to Ireland with youngest child Dylan-Jorge to visit eldest daughter Molly but encountered an obstacle she had never experienced before when travelling with her kids.

Across several Stories posts on her Instagram account, Kerry repeated one of her messages for all of her 318,000 followers to read.

Explaining her travel difficulties, she said the incident had left her “in shock”. 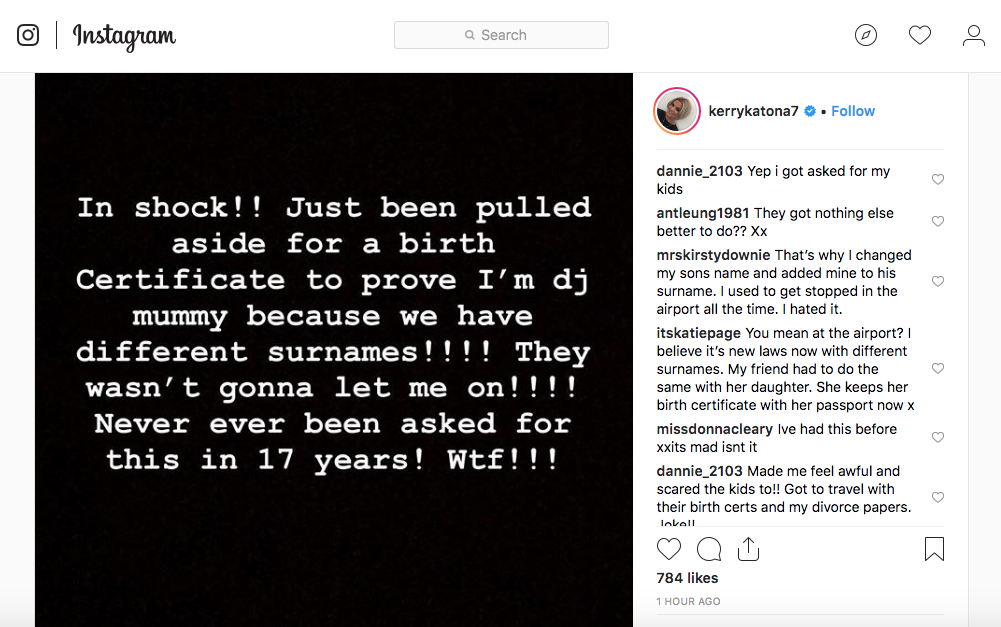 “Just been pulled aside for a birth certificate to prove I’m DJ’s mummy because we have different surnames!” Kerry wrote.

The incredulous star continued: “They wasn’t going to let me on!

Opening up the discussion with her fans, she asked in a separate post: “What if she was my friend’s daughter or something?

“Would I not be able to travel with her? None of my children have my name on their passports!”

But despite her disbelief, it seems Kerry and DJ were allowed to fly – with a short video showing the pair queuing on the runway for their Ryanair flight.

“Are you excited? We’ll go and see Molly,” Kerry can be heard asking a bashful DJ.

She also posted a selfie of herself with her four-year-old, whose dad is ex George Kay, and a provocative snap that teased she may be having a glass of fizz ahead of her trip.

The image of the glass of booze was cheekily captioned: “Oh no, stop the press. I’m drinking [sic] the airport.”

Earlier this month Kerry raised eyebrows as she slammed plans to ban early morning drinking at airports, accusing the government of being spoilsports during an appearance on Good Morning Britain.

In 2016 she was snapped by the Mirror reportedly rolling around an airport with her trousers round her ankles following a flight to Gran Canaria.

“I don’t think anyone really should be drinking before 10 in the morning, I think you’d have serious issues if you did,” she said on the ITV show.

She continued: “But I think when you go to the airport, that’s when your holiday starts and I think it’s down to the ground staff and the bartenders not to serve anyone who is drunk.

“It’s already the law not to serve people who are already drunk, just enforce that.

“Don’t ruin the fun for everyone else.”

ED! has approached a representative for Kerry for further comment.