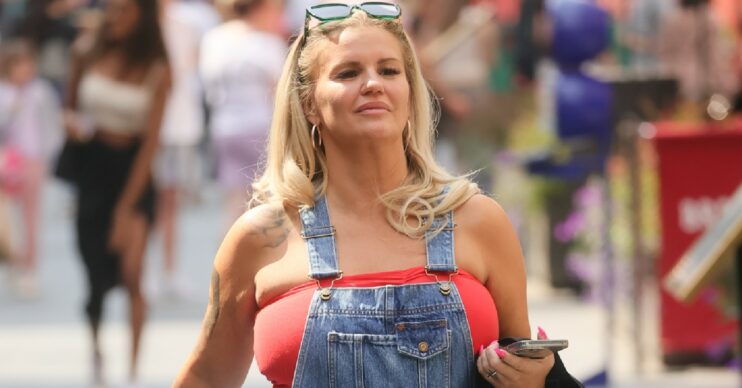 Kerry Katona has opened up about a hidden health condition that she has, admitting that she is “worried about it”.

The 41-year-old star has revealed that her legs have swollen up so much that they’re hurting her now.

Former Atomic Kitten star Kerry opened up about a worrying health condition she has been suffering from recently.

They’ve been swelling since my first boob reduction a couple of years ago, but it’s got to the point now where they’re actually hurting me.

In a new column for New!, Kerry revealed that her legs have been swelling up for the last couple of years – and are now causing her some considerable pain.

Writing in her column, Kerry said that she is going to the doctor’s soon as she is having problems with her legs.

“They’ve been swelling since my first boob reduction a couple of years ago, but it’s got to the point now where they’re actually hurting me,” she said.

‘Being in the sun’ has made it worse

The star then continued, explaining what is wrong with her legs.

“Every time I walk up the stairs they feel really heavy. Being in the sun has made them swell even more. When I look down, they don’t look like my legs. They have no definition,” she said.

The star then said that she doesn’t like getting her legs out now because of the condition.

Kerry then continued, saying she thought the condition would just go away, but it hasn’t.

“I really want to see what’s going on because I’m feeling a bit worried about it,” she added.

The star also added that she’s taken to wearing maxi dresses to cover the swelling up.

Kerry’s heartbreaking confession about her health conditions comes after she admitted that she is worried about dying young.

The star has revealed that her “health anxiety” leads to her constantly thinking she’s going to die young.

This in turn has led to her worrying that she is going to miss big moments in her children’s lives.

In the same column, Kerry confessed that because of this health anxiety, she wants her daughter, Lilly, to have a child sooner rather than later.

She said that if Lilly told her she was pregnant, she’d want her to have the baby.

She said this is because she’d want to experience as much as possible in case she dies young.