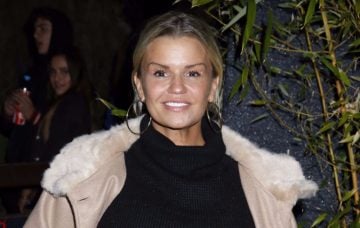 She has insisted it was just a stand-up comedy routine

Kerry Katona has clarified claims she slagged off Atomic Kitten and ex-husband Brian McFadden during a recent personal appearance.

The 38-year-old took to Instagram to address the “horrendous” story, insisting she’d been doing a stand-up comedy show at Eagle London and NOT expressing serious views.

Kerry had been on stage in London over the weekend when she made quips about being “kicked out” of Atomic Kitten, marrying “the fat one from Westlife” and not knowing who the fathers of her five children are.

But after reading write-ups of her night, she took to Instagram to clarify it was all just jokes.

“Okay, let me clear up the horrendous story saying I had a meltdown on stage!! I was performing at an over 18 gay bar!!” she said.

“I wasn’t having a go at anybody. I was telling jokes. I have done stand-up before and I always do it at my PAs. Yes, it is crude, also very funny. The crowd loved it! I also took the [bleep] out of myself. It’s called Comedy!!” 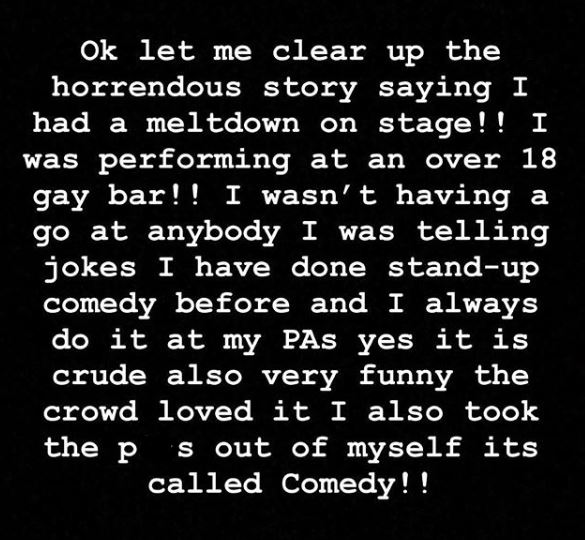 Kerry also shared a screengrab of a comment left by an owner of the club where she had performed.

It praised the star and said “it truly was a pleasure to have you not only perform your music but also bring a bit of comedy to the show.”

She replied: “I couldn’t have been that much of a ‘car crash’ like the papers are trying to make me out to be!! This is from one of the owners from the club!! You don’t see the press writing about Jim Davidson, Jack Whitehall or any other comedians who are crude with their jokes.”

In happier news, Kerry – who recently dyed her hair purple – is still loved up with boyfriend Ryan Mahoney.

They’ve just been snapped looking blissfully happy while enjoying their first holiday together in Thailand.

But don’t expect Kerry to be spilling the goss anytime soon!

She recently told Star! magazine: “I love that nobody knows anything about him. I want to keep it for myself. I’ve learnt my lesson because there are people I’ve been out with, not so long ago, who think they’re a celebrity off my back.”

Kerry added: “I’m really happy but I was also happy before Ryan came along… I was single for a year and I really needed that time to myself, so it’s taken somebody special to be in my life.”

She’s also got Dylan-Jorge, four, from her union with third husband George Kay.

Have you ever seen Kerry perform stand-up? What do you think? Leave us a comment on our Facebook page @EntertainmentDailyFix and let us know.