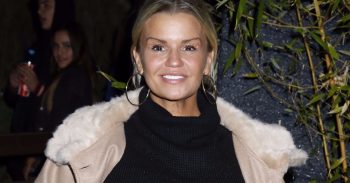 She thinks she would make a great landlady for the Rovers Return!

At the end of last month, Kym revealed she’ll be leaving the soap after playing former pub landlady Michelle Connor for 13 years.

And now, Kerry has asked bosses for an audition to replace Kym as the Rovers Return landlady.

Writing in her New! Magazine column, Kerry said: “I was sad to see Kym Marsh is leaving Coronation Street but if that frees up a space in the cast, then ITV, you know who to call!

“I reckon I’d be brilliant behind the bar at the Rovers. Can’t you just see me as the new Bet Lynch?

“I love acting and without a doubt Corrie is my favourite soap. I’m always up for an audition.”

Last week, it was revealed that Kym has decided to leave her role in the soap.

Meanwhile, Kerry – who has been married three times – has been busy filming for Channel 4’s Celebs Go Dating over the last few months as she searches for love.

And the star’s unique chat-up lines have definitely had viewers in fits of laughter.

During an episode last month, mum-of-five Kerry told one of her dates: “I’ve not had a wash,” before saying: “When I met my first husband, he was just out of jail.”