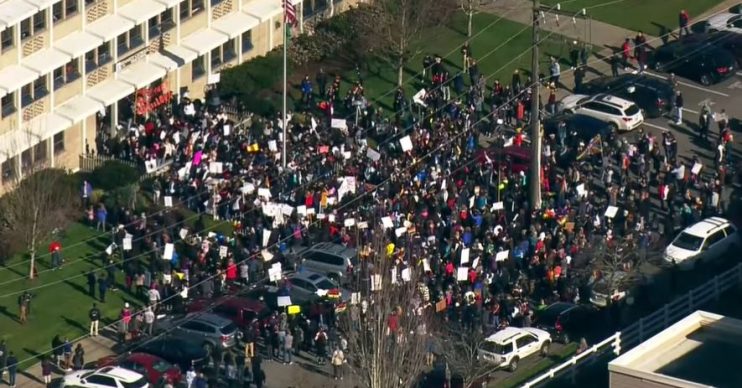 Students at a Catholic high school are protesting over two teachers allegedly being forced to quit because of their sexualities.

Teachers Paul Danforth and Michelle Beattie resigned from Kennedy Catholic High in Burien, a city near Seattle in the US, not long after they got engaged to their respective same-sex partners.

While both were said to have ‘voluntarily’ resigned, Paul’s partner Sean Nyberg alleged that his fiance was forced to quit shortly after they got engaged at Disneyland, in November last year.

Children at the school reportedly staged a mass walkout not long after hearing the pair had stepped down from their posts – sitting in and blocking the school’s corridors before proceeding to occupy the building’s front lawn, in dramatic scenes captured by news organisation King 5.

Kennedy Catholic High described Paul and Michelle as “highly capable” teachers in a letter sent out to parents – but didn’t explain why they had left.

Employees at the school must sign agreements stating their contracts can be revoked if their “lifestyle is incompatible with Catholic moral values” or if their conduct is “at variance” with the teachings of the Catholic faith, Metro reported.

I’m sad about the message this sends to LGBTQ students.

Speaking to The Seattle Times, Erika Dubois, the mother of one of the children who helped plan the protest asked: “Would it have been applied if a teacher were divorced and remarried? Or had children out of wedlock? I’m sad about the message this sends to LGBTQ students: ‘We love and accept you but we can’t employ you’.”

And in a chat with the West Seattle Blog, Paul’s fiance Sean said: “The drive and the willingness to maybe get in trouble is pretty inspiring.”

CBS This Morning quoted him as saying: “[Paul] is no longer employed specifically because he and I got engaged. This is not only personally painful, it also harms their former students who looked up to them.”

Parent Jennifer Southwell said everyone is backing the LGBT rights protest, telling the publication: “Everybody is supportive of these teachers and supportive of the kids and everybody wants to make a change.”