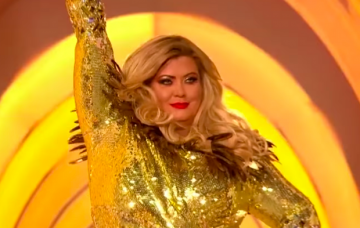 Kem Cetinay apologises to DOI’s Gemma Collins after “betraying” her

The former Love Island hunk – who is the digital reporter on this year’s Dancing On Ice – claimed on This Morning earlier this week that the Only Way is Essex star had been late to rehearsals for a group performance because she was “having a nap” and revealed she’d left Sunday’s (13.01.19) live show early because she was “bored”, prompting a backlash from presenters Phillip Schofield and Holly Willoughby.

Read More: Roxanne Pallett may have to get “normal job” after CBB scandal

However, Gemma has insisted she hasn’t done anything she was accused of and her good friend has now said sorry to her because she felt “betrayed” – but Kem has insisted he was only doing what producers had asked him to.

A source told The Sun newspaper’s Bizarre TV column: “Gemma was so upset after watching This Morning – there are plenty of things that go on behind-the-scenes during the making of a show but she’s been purposefully singled out.

“She was accused of having a nap during a dress rehearsal but that wasn’t the case – she asked whether there would be time for one and was told there wouldn’t be.

“Kem and her are good friends and it felt like he’d betrayed her by making the comments he did, which he’s since massively apologised for.

“But Kem was only doing his job as Dancing on Ice digital presenter and part of that is revealing what goes on when the cameras stop rolling.

“The pair have since managed to settle their differences and hopefully everything will go back to normal ahead of Sunday’s live show.”

When Kem appeared on This Morning, he laid bare his pal’s alleged antics over the weekend’s filming.

He said: “Obviously Gemma wasn’t performing this week, she wasn’t doing her routine but as always she had the headlines as per usual.

“We did the group routine rehearsals before – she was having a nap, she wasn’t there.

“I thought she might have learned from her mistake but we went into the live show and the last quarter of the show she went missing.

“I did speak to her afterwards and she said she was a bit bored but she does love skating.”

The 37-year-old star was then criticised for her lack of professionalism by Holly and Phillip, but Gemma has since spoken out to defend herself and insisted she has no hard feelings towards the presenting duo.

She said: “I think they were given information that wasn’t correct and they’ve given their opinion on it and there’s nothing wrong with that.

“I agree with Holly, if I had done that I’d be saying the same, ‘God, how unprofessional.’

“I’ve only got love for Holly and Phil, big up them. There’s no beef here.

“Holly and Phil have done nothing wrong.

“There’s no bad feeling there.”