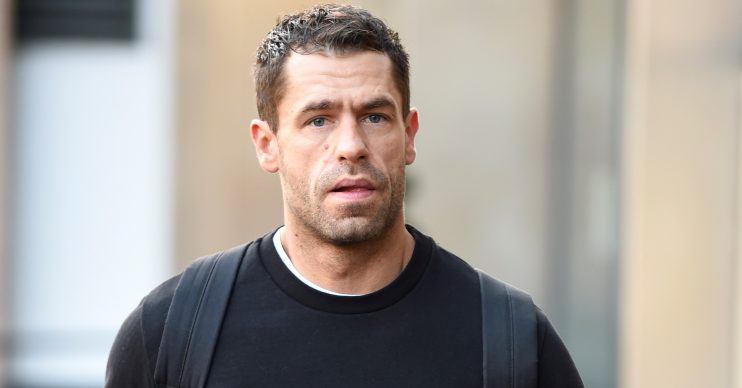 Kelvin and Oti reportedly partied until 3am recently

Kelvin Fletcher’s wife has been spotted without her wedding ring on following rumours their marriage is on the rocks.

The Strictly Come Dancing champion was pictured on a night out with his dance partner Oti Mabuse on Friday night (February 7) at the Sanctum Soho Hotel in London.

In photos obtained by The Sun, Eliza Marsland was spotted not wearing her ring on Tuesday (February 11).

Kelvin is still currently following Eliza, with whom he has two small children, Marnie, three, and son Milo, one.

I’ve felt a little bit guilty being away from them so I definitely want to take them away and just see them and hold them.

It was also claimed that Eliza was upset to see pictures of the pair out.

A source told The Sun: “Kelvin and Eliza’s relationship has really been hit by his Strictly success.

Kelvin met Eliza at school and she was the first girl he ever kissed.

They lost touch for a while as she went to uni and he found fame on Emmerdale but they met again by chance in a bar in Manchester.

The couple married in 2015, and they welcomed daughter Marnie in August 2016, followed by son Milo in December 2018.

Kelvin previously admitted he felt guilty spending time away from his family while doing Strictly.

He told Hello! magazine: “I’ve felt a little bit guilty being away from them so I definitely want to take them away and just see them and hold them.

“It still feels just so surreal, and when you don’t expect something and it happens it’s just really quite hard to take. I wish I had more words in my vocabulary to explain how I feel.”

Ent Daily has contacted reps for Kelvin for comment.