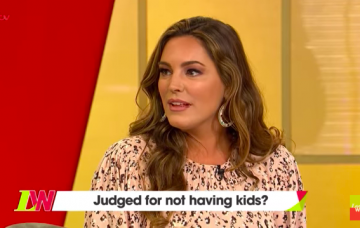 It was a raw show

The Loose Women panellists are well known for their honesty when it comes to female issues, but the subject of Thursday’s show was particularly real and heartbreaking.

Discussing whether she felt judged for not having kids, model Kelly Brook admitted: “I have tried to have children, I just haven’t been lucky. I’ve had several miscarriages.”

The 38-year-old actress admitted the subject is one that comes up a lot.

Speaking to the other panellists, Andrea McCann, Denise Van Outen and Nadia Sawalha, Kelly admitted: “Obviously people always ask me, because my biological clock is ticking and I’m approaching 40. And they’re like, ‘Well, when are you going to have children?!'”

She added that people should be more sensitive, saying: “When you ask that question to somebody you’ve got to think, ‘Hang on, there might be a medical reason why they’re not having children’. It’s not because I’m flying around the world and I’m a selfish person and I don’t want to have a family.

“People look at you like, ‘Are you ever going to have kids, why aren’t you having kids?'”

Sitting to her left, Nadia added that it’s a “personal question”, which Kelly admitted she never has the right answer for.

Nadia suggested: “How about, ‘None of your business’?”

Later in the discussion, former actress Nadia too, admitted she’d had miscarriages, too.

The TV star now has Maddie, 15, and Kiki-Bee, 11, and told Kelly: “I had mine late at 38, and I had miscarriages as well before. And you do get that feeling like people think I was being selfish.”

The conversation on the ITV show was inspired by actress Jennifer Aniston speaking frankly about the same subject this week.

In a new interview, the Friends actress says: “The misconceptions are ‘Jen can’t keep a man,’ and ‘Jen refuses to have a baby because she’s selfish and committed to her career.’ Or that I’m sad and heartbroken. First, with all due respect, I’m not heartbroken.”

Speaking to September’s issue of InStyle, the 49-year-old, who recently split from her husband of two years, Justin Theroux, added: “No one knows what’s going on behind closed doors. No one considers how sensitive that might be for my partner and me.

“They don’t know what I’ve been through medically or emotionally. There is a pressure on women to be mothers, and if they are not, then they’re deemed damaged goods. Maybe my purpose on this planet isn’t to procreate. Maybe I have other things I’m supposed to do?”

Our hearts go out to you Kelly and Nadia. Thank you for shining a light on such an important topic.

Are you a Kelly Brook fan? Leave us a comment on our Facebook page @EntertainmentDailyFix and let us know what you think.