Kelly Brook is wowing her followers on Instagram after losing a very impressive two stone.

The model turned television presenter has been getting back to her modelling roots as she's the new face of Next's F&F swimwear.

The 39-year-old shared a stunning photo of herself in an F&F one piece with her one million followers.

She captioned the sunny snap with: "In love with @fandfclothing New Swimwear Line!! My Suitcase wasn’t complete without these Swimsuits #SummerReady 🥰🌴🧜‍♀️🌸🛵🥥☀️🦐"

Kelly is believed to have slimmed down to a svelte size 12 from being a size 14-16 just last year. 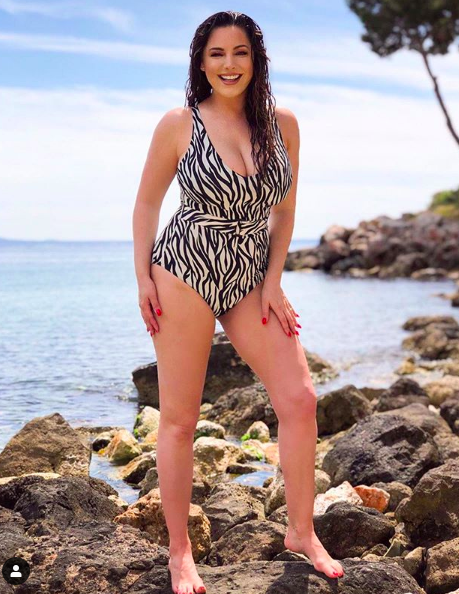 Kelly looks phenomenal in this zebra-print one piece (Instagram)

And it looks like her weight loss is down to her partnership with SlimFast.

My boyfriend said I looked like a little balloon.

She was announced as the slimming brand's new spokeswoman back in October 2018, and seems to have shed the pounds quickly since.

"It’s about getting to the best version of me and I feel on top of the world thanks to SlimFast.

"I’ve tried losing weight in the past, but I found other plans hard to stick to, boring and lacking in taste," Kelly said at the time.

Her boyfriend, Jeremy Parisi, even called her "little balloon". Kelly has been showing off her weight loss a plenty on Instagram.

"My boyfriend said I looked like a little balloon, it wasn’t just trolls it was him as well.

"I told my mum (Sandra Kelly) she should stop drinking once and she said ‘you should stop eating’.

"My family are quite real with me, I’m not living in some dream world. It was pretty apparent everyone was like ‘what are you going to do about it?" she confessed.