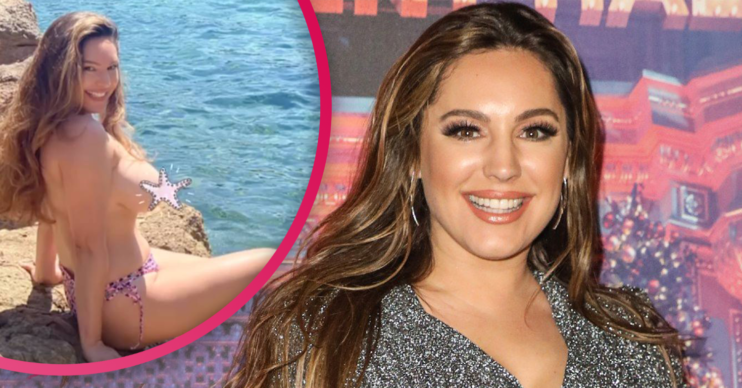 Fans were wowed - and not just by her gorgeous holiday location

The radio DJ, 41, seemed determined to get an all-over tan as she basked in the Majorcan sun.

But while many of her followers took plenty of pleasure from seeing her in such a beautiful location, their comments suggest they may not have been concentrating on the sun-soaked aspect of Kelly‘s appearance.

Going by her Instagram activity, Kelly and beau Jeremy Parisi have been enjoying a stay in the small village of Deia for the past few days.

And, although Kelly’s pics regularly provoke excitable reactions from her followers, her latest topless images seem to have brightened up many people’s days.

She has previously posted stunning selfies and other shots showing her make-up free and in glamorous bikinis while abroad.

But one snap posted earlier this morning (July 10) seems to show Kelly less encumbered by swimwear.

Every picture is a dream.

However, she did abide by Instagram’s no nipple rule, covering up parts of her breasts with discreet starfish and crab stickers.

“What a day,” she captioned one snap, showing a beautiful view of the turquoise sea in a rocky cove, which very few observers probably noticed.

Many of those commenting on Kelly’s posts were very appreciative of her making the most of the sunshine.

“That’s the body Google is talking about,” gushed one admirer.

Another joked about Kelly’s body being turned towards the sea: “Every now and then nature gets a better view than we do of nature.”

“Every picture is a dream,” contributed another keen onlooker.

Another person wrote: “There are those who have zoomed in and those who lie.”

And many hundreds of other commenters who gave today’s image a like commented simultaneously on both the weather and Kelly’s eye-popping physique by posting flame emojis.

“You are so hot @iamkb,” another poster added, stating the obvious.