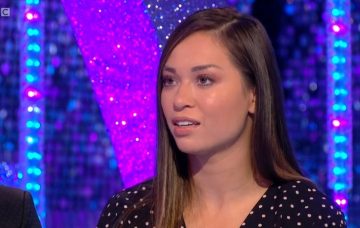 She has been married to fellow Strictly pro Neil since 2013

Strictly Come Dancing’s Katya Jones has said she and husband Neil Jones are still together and “absolutely fine” following her drunken kiss with Seann Walsh.

The 29-year-old professional dancer issued an apology earlier this week after pictures were published that showed her snogging dance partner Seann on a night out.

Appearing on Strictly’s spinoff show, It Takes Two, on Wednesday night, Katya broke her silence on what’s happening with her and Neil, saying all is well between them.

She told host Zoe Ball: “Obviously I apologise, and I can’t apologise enough to everyone who it hurt and involved. But, the main thing for me is that me and Neil are absolutely fine and that’s what matters to me the most right now.

“And focusing on my job and doing it as professionally I can.”

Katya had previously apologised via Twitter, saying: “I’m so sorry about any offence or hurt I may have caused with my actions. I wasn’t thinking and it was a one-off mistake after some drinks. I love my husband and we are very happy together, this is not a reflection on our relationship.”

Neil has yet to comment publicly on Katya and Seann’s kiss but was snapped earlier this week wearing his wedding ring as he walked his dog in London.

He’s also a professional dancer on Strictly but rather than being paired with a celebrity, he participates in the group dances.

Russian-born Katya married Neil in 2013, after initially meeting at an international dance competition in Blackpool.

They became dance partners before romance blossomed, with Katya telling OK! Magazine earlier this year she was the first to drop the L-word during a stroll in Holland.

She told the mag: “Neil is such fun. We are going to get old, we are all going to get a bit ugly, so you have got to have that side of a relationship. I don’t think it will ever be dull with Neil. He walks into a room and it lights up.”

Neil said: “I love everything about her. She’s nuts!”

Meanwhile, Katya was joined on It Takes Two by Seann, who apologised for the “hurt” he had caused with his actions.

After the pictures were published, Seann’s girlfriend Rebecca Humphries confirmed their split in a lengthy statement posted on social media, in which she claimed Seann called her a “psycho” after she speculated his behaviour was suspicious.

Seann and Katya will dance the Charleston on Saturday night’s Strictly.