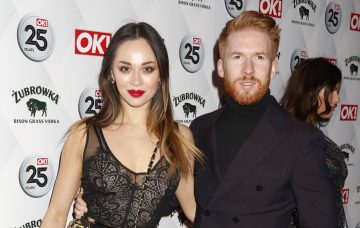 Neil Jones’ first reaction when his wife Katya Jones told him she had kissed her Strictly Come Dancing partner Seann Walsh was to make sure she was OK.

The ballroom professionals’ marriage was rocked last year when the Russian dancer was pictured locking lips with comedian Seann after a night out drinking in a pub, but Neil insists that when she told him, his “natural” response was to want to protect his spouse.

In a joint interview on ITV’s Lorraine, Neil, 36, said: “For me it was a major shock, and I appreciated that Katya told me before I saw it. Strictly were fantastic with me and with us all, they were supporting us all…”

“…I was actually more worried about Katya because I could see what was going to happen, and I was like ‘as long as she’s going to be OK’. It was a natural reaction, of course [I love her] because we’ve been together for a long time.”

Katya, 29, accepts it was a tough moment in their relationship but insists she and Neil – who she married in August 2013 – are now stronger than ever.

She said: “There was lots of different emotions… And I think now that we’ve moved on, you might even forget how you felt at that moment … Look, 10 years of being together and that’s not for nothing. We’ve gone through so many things together.”

Neil added: “The trust is there.”

Katya regrets her kiss with Seann, 33, but insists it is time for people to move on from the smooch because she and Neil have.

She said: “You just don’t realise the extent of the damage and the people you affect, families, my family, that moment you don’t. But then it’s the whole show, obviously that was horrible, all the professionals and dancers were constantly asked about it and that was unnecessary from me, absolutely.

“Even the fact that we’re still talking about it. It’s like, we’re over it, I think everyone else is over it, let’s just move on.”

Echoing his wife’s sentiment, Neil said he received messages online telling him to leave her, adding that his first instinct was to be with his wife and that he felt the public “overreacted”.

“There’s worse things in the world going on at the moment. Every time it keeps coming up, anything happens and they mention it, I’m like, ‘Come on…'”

Asked by host Lorraine Kelly if she’s still in contact with Seann, Katya said she was not.

To show the world that their marriage is very much on track, Neil and Katya are touring their own show, Somnium: A Dancer’s Dream, which is inspired by their romance and their life together.