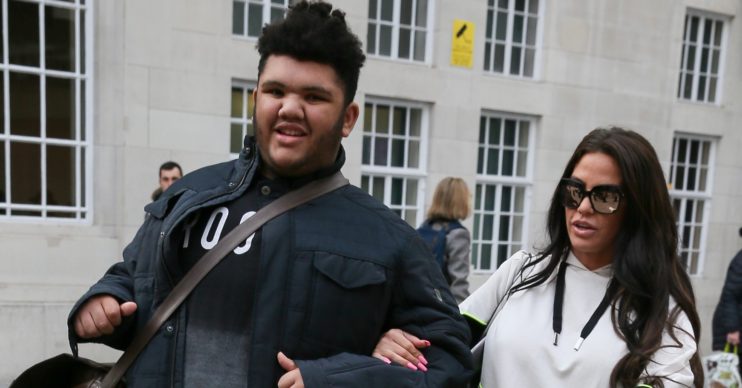 He loves to draw

Harvey Price, son of model Katie Price, has reportedly raised a whopping £12k for the NHS with a rainbow frog T-shirt he designed.

Sales of the garment have generated five-figures for NHS charities, The Sun reported.

Katie is ‘so proud’

Read more: ‘Upset’ Katie Price hits back after being ‘shamed’ for ‘messy’ garden

Mum Katie, 41, told the publication she is “so proud” of the teenager, who she said owes his life to NHS doctors and nurses.

She also revealed that Harvey has other designs to release and raise even more cash.

Katie said: “I am so proud of him, Harvey loves to draw. This is Harvey doing his bit for the NHS. The doctors and nurses have been there for Harvey from the day he was born.

He’s already got loads of new designs ready to go.

“Without them, he wouldn’t be where he is today. He’s already got loads of new designs ready to go.”

The Sun reported that Harvey plans to create a special edition of the T-shirt next, with a view to raising funds for his local hospital.

Last month, Harvey, Katie and her children with ex Peter Andre – son Junior, 14 and Princess, 12 – all wore Harvey’s shirts as they marked the weekly Clap For Carers round of applause.

It’s Thursday, so let’s show our appreciation and respect for all the incredible key workers keeping our country going. Join the nation at 8PM and give a huge round of applause from your windows, doors and balconies. #ClapForOurCarers #NHSThankyou #ClapOurCarers

In a post shared on April 30, Kate told her Instagram followers: “It’s Thursday, so let’s show our appreciation and respect for all the incredible key workers keeping our country going.

“Join the nation at 8PM and give a huge round of applause from your windows, doors and balconies.”

The caption of a pic of Harvey wearing one of the shirts read: “Harvey has used his drawing skills to design his own NHS Rainbow T-Shirt available now @teejunkieofficial.
⁣
“100 per cent of profits from the sales of this T-shirt will be donated to NHS charities and Cavell Nurses’ Trust (@cavell_nt ), which helps working and retired nurses, midwives and healthcare assistants who are suffering personal or financial hardship.⁣
⁣
“Please help us raise much needed funds for the NHS and nurses charities and buy yours now from www.teejunkie.com.”