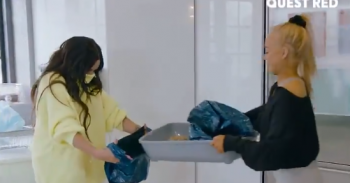 The pair struggled to clean it up!

During last night’s episode of My Crazy Life, Katie asked her new nanny Lauryn Cooke to clean out her cats’ litter tray.

But Lauryn was left gagging after discovering there was “mouldy” poo inside the tray.

Read more: Katie Price insists she has ‘no option’ but to put son Harvey into residential care

Katie told her: “Well have a look in it. See if there’s [expletive] in there.”

Katie said: “Can you clean it up, seriously, please?” to which Lauryn asked: “Can you help?!”

The mum-of-five insisted she couldn’t and Lauryn tried to lift the poo out individually with a bag.

Meanwhile on the show, Katie spoke about the decision to put her son Harvey, 16, into residential care.

Harvey has Willi-Prader Syndrome, is partially blind and autistic.

As she cuddled Harvey she told her fitness trainer boyfriend Kris Boyson: “I don’t want him to go, but the doctors and my mum say it is the best thing for him.”

She told cameras: “What they can offer Harvey that I can’t, is daily exercise, a food plan, he can’t go into the cupboards and eat.

“He’ll socialise with his friends, it’s more freedom for him.

“He is 16 and I guess I’m the selfish one because I want to keep him here with me all the time.”

Katie told Kris that Harvey “has to go” into residential care as she doesn’t have “another option”.

Read more: Katie Price’s boyfriend Kris Boyson hints he’ll have kids with her but on one condition

The former glamour model first spoke about how she was considering putting Harvey into care back in February when she appeared on BBC’s news show Victoria Derbyshire.

“It’s so hard. I’ve never had respite, I do it all myself. But I’m really having to think about it,” she said.

“I hate it because he’s my life. I’ve got to do what’s best for him, but it won’t be forever.”