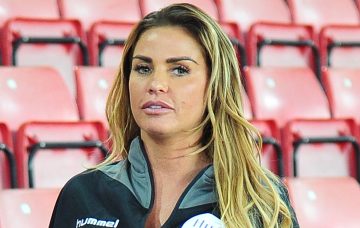 Katie Price has shared a family picture from a day out with her mum and sister.

And fans have been amazed at the resemblance between Katie’s mother Amy and her ten-year-old daughter Princess!

In the snap, shared to Instagram on Tuesday, the former glamour model is seen pulling a funny face while standing between mum Amy and sister Sophie, who are both smiling.

Surprised fans were quick to remark on the similarities between Amy and Princess.

One told her: “Wow Princess is the spit of your mum. Hope your family luck and love.”

Another said: “I thought it was Princess. They look so alike!”

A third agreed: “Thought your mum was princess for a few seconds then!”

Amy was diagnosed with a terminal lung disease last year; she has Idiopathic Pulmonary Fibrosis, a disease that leaves scarring on the lungs and makes breathing difficult.

Katie broke down in tears on Loose Women earlier this year when she revealed her mum’s health battle, and sobbed: “How can my mum die? I love my mum so much.”

Katie ran the London Marathon last weekend in aid of the British Lung Foundation, in honour of her mum.

But the star faced backlash from some after pulling out of the race early.

However, she defended herself by saying: “I did train for the run, tried my best in a heavy outfit and if my mummy is proud that’s what matters to me.”

Katie chose to run the race wearing a large pair of inflatable lungs.

Amy agreed, saying she was proud of her daughter’s efforts.

Meanwhile, the British Lung Foundation’s director of fundraising, Jason Cater, told Sun Online he was proud of everyone who ran in the marathon and raised awareness for the charity.

I did train for the run ,tried my best in a heavy outfit and if my mummy is proud that’s what matters to me ❤️

Meanwhile, other fans had something else to say about Katie’s family photo with Amy and Sophie – keep your tongue in your mouth!

Some fans grumbled that Katie had ruined an otherwise lovely photo by pulling a funny face.

Do you know anyone who ran the marathon this year? Leave us a comment on our Facebook page @EntertainmentDailyFix and let us know your stories.