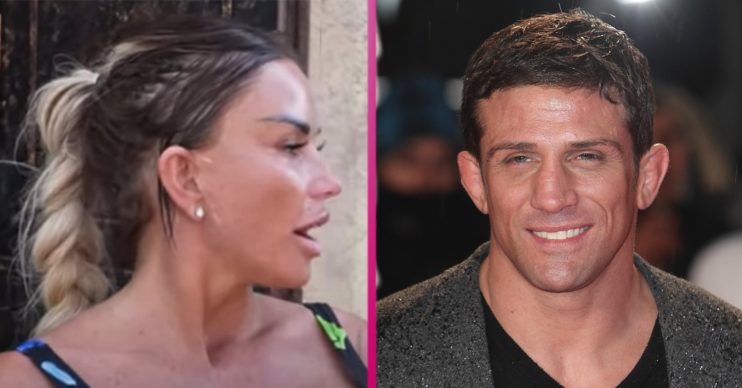 Alex Reid, Katie Price’s second former husband, is set to reveal all about their relationship.

The former cage fighter, 45, brands Katie, 42, a ‘liar’ and a ‘sociopath’ in a podcast interview.

Released on Wednesday, Alex will blast his ex on an episode of Anything Goes With James English.

In the trailer for the episode Alex says: “She’s a liar, a sociopath and I can prove it.”

Last year Katie had to pay Alex £140,000 in legal costs after she allegedly shared a sex tape.

The tape allegedly featured Alex. A 2018 episode of Celebrity Big Brother’s Bit On The Side reportedly just.

In the podcast’s teaser clips, Alex goes on to say: “In 2018, Katie showed an audience of 40 sex footage of myself.

“The following week she’s in front of Graham Norton I think in front of 20 million people.

“The day before that she’s called her horse Jordan’s Cross Dresser. Babe, I gotta say something – you’ve orchestrated this and created this.

“This is beyond disgusting. I felt raped, absolutely raped.

“I felt raped in every single way. As someone who promotes anti-bullying – has trolled.

“I’ve got all the trolling evidence. I’ve got a whole stack of evidence where she has threatened to destroy me, publicly.”

During Katie’s 2015 winning stint on Celebrity Big Brother, she openly discussed her past sex life with Alex.

My podcast with Alex goes out this wed at 5pm, click the link to set a reminder https://t.co/aSbQedygx2

Alex talks about his relationship with @KatiePrice and his battle with mental health. pic.twitter.com/CRk1e6UiQH

She said: “A lot of straight men like to have the pinkie up there, but Alex wanted it all.

“That’s why I divorced him. Because I didn’t want to be the man.”

Katie Price’s representative told the Daily Mirror: “Katie would like to urge Alex to let go of the anger and begin a new chapter.

“Katie will not be drawn into any more tit for tat and wishes Alex nothing but peace, and future happiness.”

Following Alex’s divorce from Katie, he went on to have a relationship with Chantelle Houghton.

They share a daughter together, Dolly, now aged eight.

He is currently in a long-term relationship with his girlfriend Nikki Manashe.