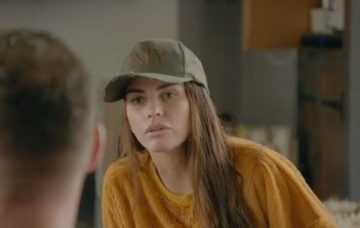 Katie Price tells Kieran Hayler she “deserves better” than him

Katie Price has told estranged husband Kieran Hayler she deserves “better” than him in the first trailer for her new reality show.

The mum of five has let the cameras into her house once again for a new series of Quest Red’s Katie Price: My Crazy Life.

It was filmed during the breakdown of her marriage to cheating third husband Kieran and will give fans the TRUE story of what has really happened between them.

Katie, 40, shared a first-look trailer to her social media accounts on Friday night, saying: “SO excited for this! The brand new series of My Crazy Life starts Monday 16th July at 10pm on Quest Red.”

The trailer features a scene in which Katie and Kieran, 31, are having a tense one to one.

She shouts at him: “I shouldn’t be with you because of what you’ve done. I shouldn’t! I deserve better.”

Kieran appears frustrated as he hits back: “Okay, you shouldn’t be with me.”

Katie also tells the camera: “I’m going through a really tough patch with Kieran at the moment and I’m trying to keep it a happy, steady home and away from the children.”

The estranged couple are parents to son Jett, four, and daughter Bunny, three.

Katie is also mum to son Harvey, 16, from her relationship with ex Dwight Yorke, and son Junior, 13, and daughter Princess, ten, from her marriage to first husband Peter Andre.

She wed Kieran in January 2013 after a whirlwind romance but it hasn’t been a smooth ride as she accused him of bedding her best friend while she was pregnant.

Katie initially vowed to divorce Kieran before taking him back.

Then, she accused him of having sex with their kids’ nanny, before last month claiming claiming he’d cheated on her with a 19-year-old shop assistant.

Katie has now confirmed the pair have separated and she’s moved on to date one-time reality star and weight loss specialist Kris Boyson, 29.

Meanwhile, the trailer also touches on other huge parts of Katie’s life over the last few months, all of which have been filmed.

She’s seen sitting in a hospital room with her beloved mum Amy, who has been diagnosed with a terminal lung condition.

Katie says: “I can see in my mum’s eyes each day that she’s getting weaker and weaker.”

The former glamour model is also seen visiting parliament, where she’s been campaigning for stricter rules on online trolling and punishment for those who spout abuse online.

The trailer features all five of Katie’s children, too, showing that each of them will be appearing on camera.

Will you be tuning in to Katie’s new show? Leave us a comment on our Facebook page @EntertainmentDailyFix and let us know what you think!