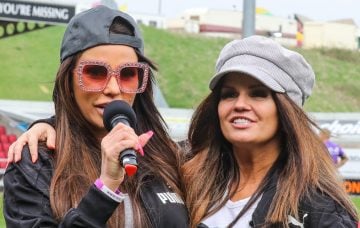 Kerry and Katie have been friends since meeting in the jungle

Kerry Katona has urged Katie Price’s critics to “lay off her” following a stream of recent headlines.

The former Atomic Kitten singer became friends with Katie when they appeared on the third series of I’m A Celebrity… Get Me Out Here! back in 2005.

In a new interview with The Mirror, Kerry spoke about Katie’s recent decision to spend four weeks in rehab to seek help for post-traumatic stress disorder.

Kerry urged Katie’s critics to give her some space and not criticise everything she does.

“Everyone’s quick to jump on the bandwagon and notice all her faults. All I want to say to everyone is: ‘lay off her’. Why not pull each other up?” said Kerry.