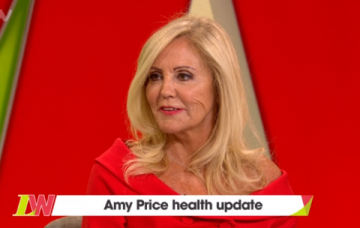 Katie Price’s mum Amy opened up on Wednesday’s Loose Women about how her family are coping as she battles a terminal lung condition.

The glamour model appeared on the show with her mum earlier this year, where they revealed she has idopathic pulmonary fibrosis, a type of lung disease which gradually makes it difficult to breathe.

Amy, 64, returned to the ITV show today without her daughter to give an update on her health.

Asked if Katie’s five children – Harvey, 16, Junior, 12, Princess, 10, Jett, four and Bunny, three – understood what was happening, Amy replied: “Harvey wouldn’t understand but he is doing really well. The others do – Junior and Princess – the others are too young.

“They look at me and think ‘Nan is still here, she looks well, what is going to happen?’.”

Amy said she has already written letters to each of her grandchildren to open after she’s gone.

She’s hoping that won’t be for some time yet though as she’s currently keeping fit and well by doing yoga and spinning classes – in fact, she’s so fit that she isn’t yet eligible to go on the donor list for a lung transplant.

Amy, who looked glamorous in a red dress with voluminous blonde hair, told the Loose Women: “I’m feeling quite well. I have got worse breathing-wise but it hasn’t impacted on my life.

“I am still doing everything I used to do, like my classes exercising.”

She added: “The NHS have been brilliant, I went for tests to have a transplant and I am too fit to have one. They will keep an eye on me and if I deteriorate I will go on the list.”

Katie, 40, has previously offered to give her mum one of her lungs but Amy refused.

“I can’t take one of her lungs, that’s ridiculous,” she said today.

“Say if I had, I might not have survived the operation so it would have been a waste of a lung. She’s got her own family and her children and it’s important she’ll be the figurehead of the family when I go so…”

Loose Women panellist Anne Diamond completed her sentence to say, “…so she needs to be as healthy as she can,” which Amy agreed with.

She said she will have to leave her a large letter with instructions on how to move on and live her life in the future.

She said: “I don’t want to talk about exactly what’s going on but don’t believe everything you read in the papers. You know what it’s like they sensationalise everything and make her out as this and it’s a load of rubbish.

“She is doing alright and I would say now she’s coming out of the doom and gloom and she’s really quite positive.”