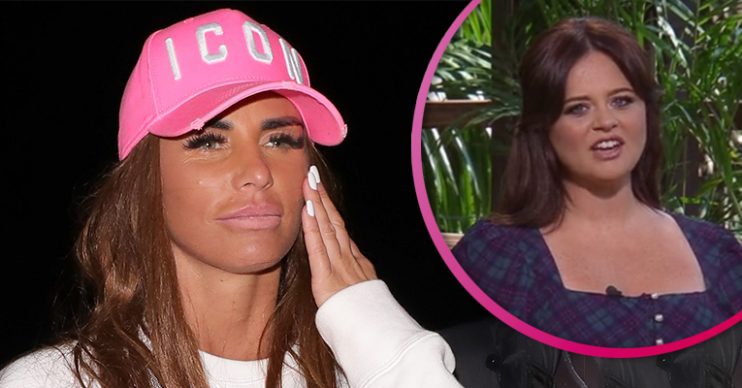 It seems Katie Price is ready to head to Australia to confront Emily Atack after the I’m A Celebrity: Extra Camp presenter appeared to make a jibe about her.

During an episode of the spin-off show, Emily joked that her co-stars Joel Dommett and Adam Thomas should get tested for diseases after they took a dip in the camp pool, where Katie and ex-husband Peter Andre first canoolded.

Emily said on the programme: “I hope you boys went to the clinic after being in that pool.”

It was then reported that Katie was unimpressed with the remark and was tempted to fly to Oz to confront Emily.

Now, the mum-of-five has publicly slammed the actress and even made a slur about her sex life.

If you’ve got something to say, don’t say it behind my back on tele say it to my face.

In a video shared to her Instagram Stories on Friday, Katie said: “So Emily Atack you think it’s clever to [bleep] me off. Who are you anyway?

“Looks like I’m coming for you. If you’ve got something to say, don’t say it behind my back on tele say it to my face.

“All the men I know you’ve been with haven’t got a good thing to say about you. Eugh fishy.”

It comes after a source claimed former glamour model Katie was “furious” over Emily’s remark.

The insider told The Sun: “Katie says she’s not watching the show, but when Emily Atack mentioned her on Extra Camp all her friends told her what she said. Loads of fans were messaging her on social media too – and Katie was furious.

“She was telling people that she can’t believe Emily would say something so snide and if she ‘wants a problem, I’ll give her a problem.'”

They added: “At one point Katie was saying she’d fly out to Australia and confront her. She’s not going to, obviously, but she was asking around to see if anyone had Emily’s number. She thinks she wouldn’t be so brave to say it to her face.”

The source added that Katie believes she’s “due a public apology” and was “really shocked by her joke”.