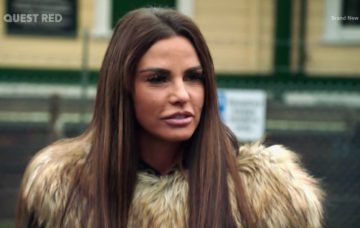 Katie Price given court date after being charged with driving offence

The mother-of-five will appear in court next month

Katie Price will appear in court after she was charged with being drunk in charge of a motor vehicle.

The former glamour model was charged by postal requisition and will appear at Bromley Magistrates’ Court on January 7.

It follows her arrest on suspicion of drink-driving in south-east London two months ago.

A spokesman for the Metropolitan Police said: “Police in Greenwich have charged a woman with being drunk in charge of a motor vehicle.

“Katie Price, 40, of Horsham, Surrey, was charged by postal requisition on Monday, 10 December.

“She is to appear at Bromley Magistrates’ Court on Monday, 7 January. The charge relates to an arrest for drink drive on Wednesday, 10 October in Shooters Hill Road, Woolwich.”

Police at the time said officers had come across a car showing signs of damage stationary at the roadside at about 2am.

The former glamour model was arrested in the early hours of the morning on October 10 after her pink Range Rover was found with signs of damage while stopped on a street in South East London.

It was claimed Katie, 40, had earlier attended her ex-boyfriend Kris Boyson’s birthday party.

A Met Police spokesman had said at the time: “At approximately 2am British Transport Police officers came across a car showing signs of damage stationary at the roadside in Shooters Hill Road, Woolwich.

This isn’t the only problem Katie has had to deal with in recent months.

The ex-Loose Women panellist revealed in July she had reported herself to police for violating a driving ban, handed to her in February after she was caught speeding.

The star entered rehab earlier this year for post-traumatic stress disorder after a difficult year.

Katie had sought help after her mum Amy was diagnosed with a terminal lung condition, her marriage to third husband Kieran Hayler broke down, and a romance with ex-boyfriend Kris ended.

Earlier this month, Katie narrowly avoided by declared bankrupt after reaching a deal with her creditors.

A specialist insolvency and companies court in London was told that the former glamour model has agreed a plan to pay back what she owes.

She was given time to try to come to an agreement at an earlier hearing.