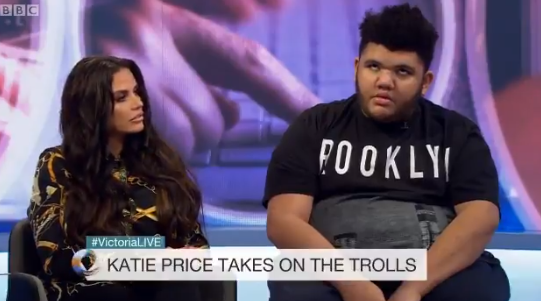 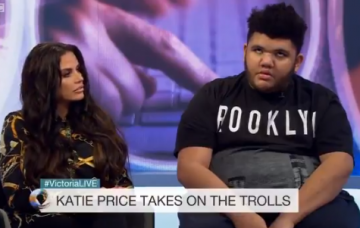 She said he's becoming a "danger to himself"

Katie Price has said she’s considering putting her son Harvey in residental care as he’s become a “danger to himself”.

Harvey, 16, is partially blind, autistic and has Prader-Willi syndrome and Katie said he’s been acting up at home and his siblings can sometimes be “scared” of him.

During an appearance on Victoria Derbsyshire’s BBC Two show on Wednesday, Katie said she “hates” the thought of putting Harvey in care, but she’s got to do what’s best for him.

She looks after Harvey, 16, and who is partially blind, autistic and has Prader-Willi syndrome.

But she says she is starting to consider residential care due to his behavioural problems. pic.twitter.com/XdnhdzASWH

She said: “It’s got to the stage now, he’s a danger to himself, for the first time ever I might have to have him in residential home Monday to Friday.

“He knows if he kicks off in the morning the driver won’t take him and he’s missing out on his education. He just wants to be with me all the time.”

She continued: “I’ve never had respite. I don’t have a carer. I do it all myself. But I hate it because he is my life.

“I’ve got to do what’s best for him and it won’t be forever. When he’s smashing things and the kids are scared because he’s big I’ve got to do it for him.

“If there is anyone out there who could give me advice and let me know how they cope when they go residential.”

Katie, 40, appeared on the show to talk about her campaign to make online abuse a criminal offence, which recently won the backing of a parliamentary committee.

She said on the BBC show: “He is so innocent sitting here. What do you get out of picking on someone like this?

“I have named and shamed a lot of them but I don’t know why they want to pick on him.

“People may slate me as well but whether you like me or hate me you can’t knock me for this. I would like to take it worldwide. Why not?”

The star has Harvey from her previous relationship with Dwight Yorke.

Katie recently revealed she plans to adopt a Nigerian orphan.

Speaking on This Morning last month: “I’ve always said I’ve always wanted to adopt a child. I don’t care if they’ve got disabilities – just because I feel I can offer a place.”