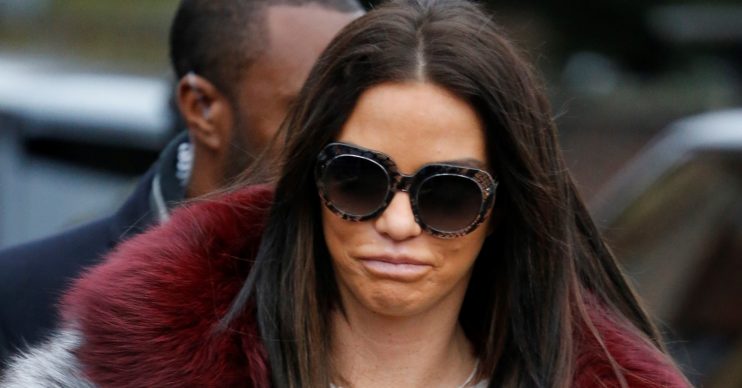 Katie Price ‘begging friends for cash’ after being declared bankrupt

She's apparently vowed to make her millions back

Mum-of-five Katie Price has reportedly been asking friends for money after being declared bankrupt.

The reality TV star, who was once reputed to be worth £45 million, has apparently come up with a plan to try and get back her fortune.

According to The Sun, a source claimed Katie has been “asking friends for loans” and said she’ll “make her millions back in no time”.

The insider told the publication: “Katie’s been asking friends for loans, saying that she’s already got several business ideas in the pipeline and that she’ll make her millions back in no time.

“She’s saying that the Pricey will be back on top in no time, so they’ll get all their money back soon – probably with interest.

“The thing is, Katie’s not really taking any of it seriously – she is treating it like a temporary thing, not a serious financial problem.”

Katie refused to speak about her money woes in a recent video shared to her YouTube channel.

In the footage, titled ‘Katie Price Answers the Web’s Most Searched Questions’,  the star admitted she thinks talking about money is “unattractive”.

Katie’s been asking friends for loans, saying that she’s already got several business ideas in the pipeline.

When asked what her net worth is, Katie said: “I hate talking money. I have never spoken about money. Everyone seems to know what I have got but guess what no one knows but me.

“It’s really unattractive to talk about how much money you’ve got or not got or got.  So that’s the answer to that. Only I know.”

Earlier this week, Katie was declared bankrupt in court despite not attending or sending a solicitor.

There had been a plan in place for Katie to pay her creditors £12,000 a month.

However, it’s been reported that the former glamour model failed to stick to the agreement.

Judge Jonathan Middleton said: “I do judge Ms Price to be bankrupt. The date is today and the time is 12:35. Ms Price isn’t present or represented so there is, as far as we can identify, no opposition.”