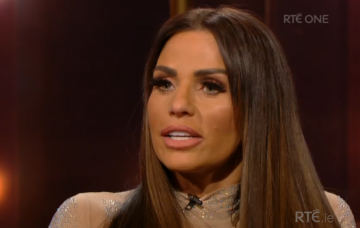 Katie Price has opened up about her mother Amy’s incurable lung disease and how she’s trying to remain positive but realistic about her chances.

The mum of five gave a candid interview on Ireland’s Ray D’Arcy Show, in which she vowed not to cry as she discussed her mum’s diagnosis with Idiopathic Pulmonary Fibrosis.

“She’s now on the lung transplant list but even then it’s something like 90 per cent don’t survive the operation. It’s a tough time.”

Katie, 39, went on to say that she’s trying to remain positive but also realistic about the future.

“I won’t cry now because I’m trying to be strong but I always visualised taking my mum her shopping like I did for my nan, or me caring for her when she’s older.

“I always thought she’d be there to see Harvey’s 18th birthday, or the kids’ 16th birthdays, but the realistic thing is she won’t.”

When asked if she has been making the most of time with her mum now, Katie said: “She’s so stubborn, like me. I keep saying, what’s on your bucket list? I have a few things up my sleeve.

“You have to enjoy every day like it’s your last day as you never know when it’s the end.

“No one wants to accept it and I’m very matter of fact.

“I even say to mum, even your funeral, what would you want for it? I’m trying to be light-hearted but of course I love her to bits.”

Katie recalled her horror when Amy was diagnosed, saying: “My mum is so healthy and goes to the gym. But four months ago she had a cough she couldn’t get rid of, so she thought she’d go private to have her lungs checked.

“The doctor said it could be one of four things, but it wouldn’t be this one, as it’s what you’d die from. And that is what she has.

“My mum had a cough for five years. Everyone thought it was asthma, but it wasn’t, it was this. If it had been caught before she could have been saved, but it’s too late.”

Katie revealed on Loose Women last year that her beloved mum Amy had been diagnosed with the incurable lung condition, Idiopathic Pulmonary Fibrosis

It’s the same illness that the late Keith Chegwin had.