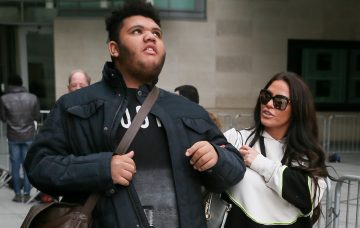 He's been branded "amazing" and "talented"

The reality TV star showcased her 16-year-old son’s secret talent in a video shared to his Instagram account, which is run by Katie, on Wednesday.

In the clip, Harvey – who is partially blind, autistic and has Prader-Willi syndrome – is seen playing Beethoven’s Fur Elise.

I love playing the keyboard 🎹🐸🐸

The post was captioned: “I love playing the keyboard.”

Fans praised Harvey’s rendition of the song, with many branding him “talented” and “amazing”.

One person said: “You play beautifully Harvey,” while another wrote: “So talented Harvey.”

It comes after Katie was begged by fans to remove Harvey’s Instagram account after he was cruelly mocked by online trolls.

The nasty comments came after Harvey’s account showed a picture of him holding a drawing of his mum on the Gatwick Express.

It was captioned: “Love drawing me and mummy and Gatwick express.”

Many praised the sweet picture but after lots of unkind comments, fans pleaded with Katie, 40, to disable the account’s comments section to stop Harvey being ridiculed.

One wrote: “Please don’t allow people to comment- protect him.”

A second added: “I agree with what someone else said switch off the comments option, it’s not fair that he should take this abuse, please protect him from it, good work Harvey you’re a star.”

Love drawing me and mummy and Gatwick express 👋

Katie has been fighting tirelessly for “Harvey’s Law”, which, if passed, would see online trolls prosecuted for their verbal abuse.

She began a petition to make trolling a criminal offence and it received over 220,000 signatures last year.

MPs also acknowledged that online abuse should be made illegal last month.

Earlier this month, Katie revealed her plans to move Harvey into residential care at his school as it was becoming harder to look after him full-time at home.

The mum-of-five said he’s been acting up at home and his siblings can sometimes be “scared” of him.

During an appearance on Victoria Derbsyshire’s BBC Two show, Katie said: “It’s got to the stage now, he’s a danger to himself, for the first time ever I might have to have him in residential home Monday to Friday.

“I’ve never had respite. I don’t have a carer. I do it all myself. But I hate it because he is my life. I’ve got to do what’s best for him and it won’t be forever.”

What do you think of Harvey’s keyboard skills? Leave us a comment on our Facebook page @EntertainmentDailyFix and let us know.