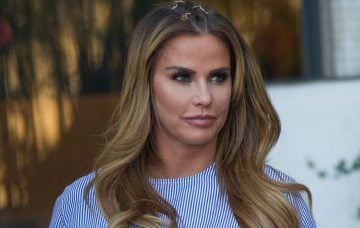 Find out when it's back here

Katie, 40, announced her big news on Instagram and excitedly told her legion her followers “I’m back!”

Confirming the start date as Monday July 16, Katie added: “A brand new series of my show Katie Price: My Crazy Life starts next month on @Quest_Red. Who’ll be tuning in?”

Fans have been quick to reply to the former glamour model, with one saying: “I am soooo excited !! Xx.”

Another added: “I will be watching, I am huge fan.”

Katie first confirmed in February that Katie Price: My Crazy Life had been recommissioned for a second series.

And she was more than happy to reveal what fans can expect, too.

The mum-of-five said at the time: “Taking on Parliament, helping my Mum, keeping the kids in check, and of course figuring out what is going on with Kieran – nothing is off limits and it will all be in the new show.”

Since then, Katie has split from her third husband Kieran Hayler – and she is now coupled up with a new man.

The star is dating 29-year-old Kris Boyson and on Friday the couple made their relationship Instagram official.

Earlier this week, the couple also posed for their first glossy photoshoot together, gracing the cover of OK! magazine.

Gushing about her new fella, Katie said: “I’ve never had anyone who’s like him – he’s a man’s man.

“He’s got his own job, he’s not false or fame hungry. He goes to work and doesn’t want to hang around me at work.”

Katie also confirmed her marriage to third husband Kieran, 31, had ended amid claims he cheated on her again, this time with a 19-year-old shop assistant.

While being mum to 16-year-old Harvey, Katie shares kids Jett, four, and Bunny, three, with Kieran.

She has a son Junior, 13, and daughter Princess, ten, with her first husband, Peter Andre.

It is not known whether new man Kris will feature in the new series of Katie Price: My Crazy Life.