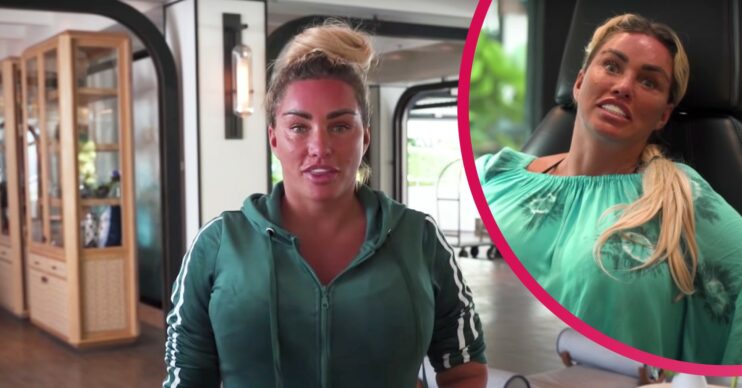 Katie is ready to work hard

Katie Price has reportedly vowed to lose THREE stone before her wedding to Carl Woods to ensure she gets her “Jordan” figure back.

The star is said to be fed up of feeling “sluggish” and “overweight”, and is determined to “feel confident in dresses again”.

After complaining of feeling “sluggish” and “overweight”, Katie is reportedly determined to lose weight before marrying her fiancé, Carl.

The 43-year-old was seen hitting the treadmill during her holiday in Thailand and is now reportedly going to put herself through a “boot camp regime” to achieve her weight loss goals.

Read more: Katie Price news: Kieran Hayler ‘hopes justice will be served’ and has told kids Katie may be jailed

A source spoke to new! magazine about how Katie’s upcoming wedding is providing her with motivation to lose weight.

“She wants to lose three stone to get back to her Jordan figure,” they said.

They continued, saying: “She wants to become toned and strong and feel confident in dresses again – she is over living in tracksuits. She also wants to look amazing on her special day.”

The source continued, explaining how Katie is apparently going to work towards losing three stone before the wedding.

They revealed that the 43-year-old is going to cut out takeaways and junk food. They added that takeaways have been her “downfall” in the past.

“Katie was on MasterChef so she can actually cook and she does enjoy eating fresh meals. She wants to cut out the high sugar and will sign up to a prepped meal website,” they said.

The source then went on to reveal that the former glamour model is set to take up kickboxing and horse riding to get her fitness “back on track”.

What else has Katie been up to recently?

News of Katie’s fitness goals come a week after it was reported that the star had been charged with harassment.

Katie’s ex-husband, Kieran Hayler, and his fiancée, Michelle Penticost, have a restraining order against Katie.

In January, the 43-year-old was arrested after allegedly sending her ex-husband text abusing Michelle.

Last week, reports claimed that Katie had been charged harassing her ex-husband’s fiancée.

She will reportedly appear in Crawley Magistrates’ Court in April.