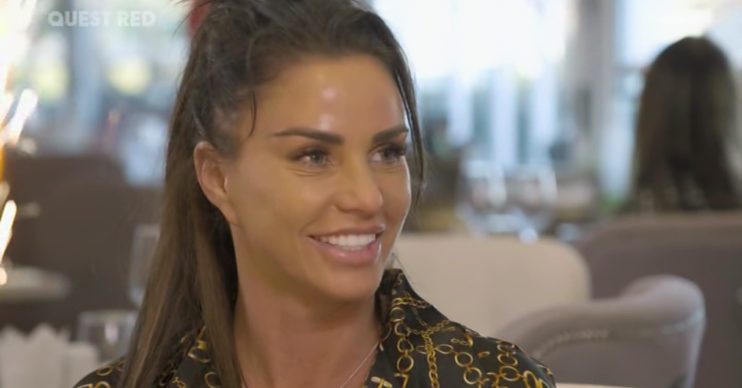 Former glamour girl posed for the saucy mag in 2002

Former glamour model Katie Price is hoping to revive her Playboy days and strip completely naked for the magazine.

Katie, 41, famously bared all on the cover of the iconic mag 18 years ago – and it seems her sights are firmly set on doing it again.

In an Instagram live video this week, the mum-of-five was asked what she currently had in her handbag.

Katie, who used the name Jordan when she first found fame, replied: “In my bag I’ve got a Playboy mag and fruit.

“Yes I’ve got a Playboy because I want to do it again.”

During Katie’s heyday as Jordan, it is believed she moved into the infamous Playboy Mansion in Los Angeles, owned by the late Hugh Hefner.

Yes I’ve got a Playboy because I want to do it again.

Katie, who was branded ‘London’s legendary bad girl Jordan’ on the cover of Playboy mag, stayed in the house for six weeks in total.

But while on tour in 2017, she revealed to fans that she moved out because she didn’t want to sleep with Hugh.

Prior to Hugh’s death in the September of 2017, she told the crowd in Cardiff: “When I was younger, I lived with Hugh Hefner at the Playboy Mansion for about six weeks.

“He’s a really nice guy though. I just didn’t want to do it.”

She had, however, previously admitted to some rather saucy behaviour in the Playboy Mansion.

During another evening with fans the year before, she confessed: “You know, when you’re with your mates like in a room, mucking about, like the Playboy Mansion. I have like had threesomes and all of that. It was years ago.”

Last year, Katie endured relationship woes, with 2019 ending in her being declared bankrupt.

However, shooting for the cover of Playboy would dramatically boost her international profile, if given the opportunity again.

There is also a rumour that Katie is being lined up for the 2021 series of Dancing On Ice.

Speaking about his dream line-up to new! magazine this week, creative director Dan Whiston said: “I’ve always said Katie Price would be a good signing. She’d be quite outspoken and fun.”