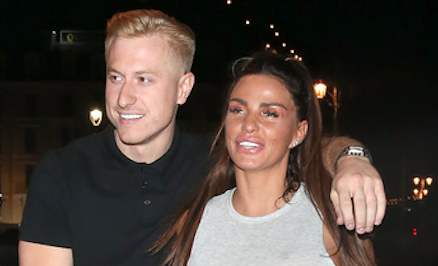 Katie Price ‘wants to have twins with boyfriend Kris Boyson’

Katie Price is keen on becoming a mother of SEVEN, according to a report.

But according to The Sun’s website, the 41-year-old is trying to become pregnant with twins and has visited an IVF clinic with boyfriend Kris Boyson.

The tabloid claims Katie has filmed scenes for her reality show My Crazy Life at a London clinic and fans will see her consult experts on conceiving two babies at the same time.

However, it seems the couple’s plans have surprised even their closest pals.

A source is reported to have told the website: “Everyone was pretty shocked when Katie announced she wanted to have TWO kids at 41, because she and Kris are so off and on.

“But it seems like the only thing they agree on is starting a family. Katie took the reality TV crew along to the consultation and the cameras were in the appointment with her.

“She’s made no secret of wanting more kids and says that getting pregnant with Kris can only make their relationship better.”

Fans recently had their say on the pair’s future together, cautioning Katie against rushing into anything.

And Katie also sent fans into a frenzy earlier this month when a post she shared on her Instagram Stories made people think she and Kris had secretly tied the knot.

Another snap from the same day showed Kris with his hand on Katie’s stomach, leading fans to wonder if she might be expecting.

ED! has approached reps for Katie and Kris for comment.

Harvey loving hanging out with the boys 💕❤️💕