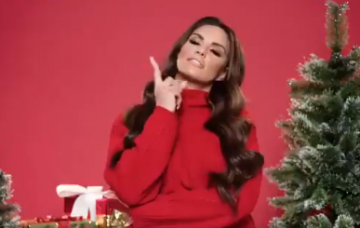 But her family are dead against it

Katie Price has said she wants another facelift.

Although the 40-year-old glamour model has previously complained that her last facelift was “botched”, it hasn’t stopped her from considering more surgery.

Speaking in a clip for her upcoming ‘My Crazy Life’ Christmas special, Katie told her mother Amy: “Might have a little face-lift.”

However, terminally-ill Amy replied: “You won’t be able to turn your face. You’ll be like that – ugh!”

Katie has previously insisted she is not addicted to surgery and said people only suspect she is because she is so candid about the work she’s had done.

The star has undergone various procedures over the years, including having breast implants and a facelift, but Katie has denied being addicted to going under the knife.

Asked whether she’d developed an addiction, Katie told OK! Magazine: “Definitely not. I’ve seen psychologists about it for a TV show and they said I wasn’t.

“I just look to improve how I look. I just seem like I have loads of work done because I’m open about it.

“I was talking to a well-known celebrity recently and I asked her where she gets her lips and fillers done, and she was like: ‘Me? I don’t have it done.’ And it’s so obvious that she does! Why deny it? I was like: ‘Yes you do!'”

Read more: Katie Price declares herself bankrupt on her own show

In 2017, Katie was left in agony after she experienced an adverse reaction to the medication she was prescribed when she was having her veneers updated in Turkey.

“I was flying backwards and forwards to Turkey doing them and then they put me out for five hours and I flew back the next day, which was fine because they gave me all the antibiotics and everything and then on my way [to the television appearance on ‘Loose Women’], I was like, ‘Oh my God, I feel really ill, really, really ill.’

“And I read the box and – because I’m allergic to penicillin – that’s what they’d given me so I was really ill for days after that. And then I did a chat with Piers Morgan with my temporaries and I was in so much pain.”

Katie had previously told The Sun On Sunday that she wasn’t planning on having surgery on her face ever again after a botched procedure last year.

“Maybe, with hindsight, I should have thought twice before jumping in. I wasn’t happy with the outcome last time and didn’t like the way I looked.

“This is the last time I will have surgery on my face.”

Do you think Katie should have more surgery? Leave us a comment on our Facebook page @EntertainmentDailyFix and let us know what you think.