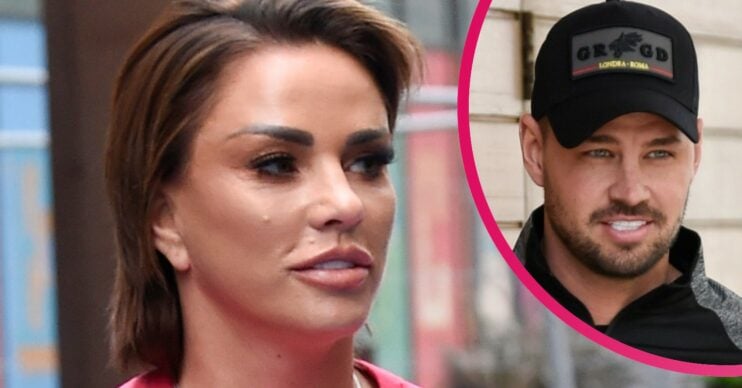 Katie Price reportedly wants to lose around two stone in a bid to get pregnant.

The celebrity mum-of-five, 43, hopes to have baby number six with her fiancé Carl Woods, 32.

Although Katie and Carl have only been together a little over a year, they are keen to start a family.

They’ve both spoken of how much they want a kid, and Katie’s said she’s ‘not been careful’ for months.

Now a source has told new! Magazine that Katie aims to lose a whopping two stone (28 pounds) and get as healthy as possible.

Why does Katie Price ‘want to lose weight’?

The source also said she is unhappy with her current weight and ‘hates’ how she looks.

“She’s not comfortable being bigger and wants to lose the weight and get back to her original size.”

Recently Katie said she was so upset when Instagram users assumed she was pregnant.

The star posted a snap of herself cradling her stomach. But she said she was simply feeling bloated.

And that the disappointment of not being pregnant yet was really starting to get to her.

She bemoaned to The Sun: “That was so annoying as everyone was speculating, I was pregnant, but I wasn’t. I wished I was.

“I have put on loads of weight as I’m trying to eat really healthily – so I just felt like saying: ‘BLEEP off’.”

Adding: “It’s been so disheartening.”

Meanwhile Katie’s updated her fans on her health kick over on YouTube.

She posted a video of her experience with colonic irrigation.

The process removes faeces and other toxins through a tube being placed up the rectum which then flushes wastage out.

Addressing the camera, Katie explained: “I’m having my bum cleaned, my insides cleaned out.

“Last time I did this was years and years ago, where a tube was up my bum and a lady was controlling water that went in me.

“She held water, tight until there was awful pain, and released it – loads of gas and everything came out.”

The former glamour model said she hopes to make her sessions a regular thing.

Katie confirmed: “I’m going to have another one next week, and then I’m going to maintain it.”