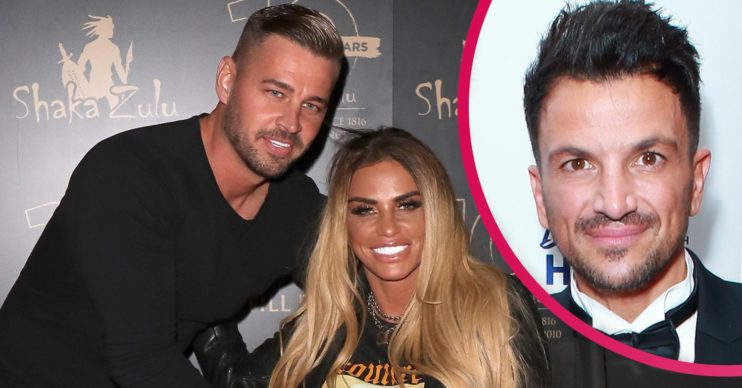 Katie Price has angered Peter Andre fans after she boasted about her new boyfriend Carl Woods.

Taking to social media, she gushed over the new man in her life.

Sharing a snap of him swiping his credit card, she captioned it: “Never had a man that pays until @carljwoods.”

But dozens of her Instagram followers questioned the her claims.

In fact, some said they’re certain her ex-husband Peter Andre, 47, paid for many things during their marriage.

One user hit out with: “Sure Peter paid his own way! Strange how you keep trying to prove he pays his own way when no one else feels the need to do this.”

While another user argued, “She said Kieran used to pay and Peter” referring to Katie’s third ex-husband, Kieran Hayler.

And a third user claimed: “I don’t believe that for a second and bashing your kids’ dads in public isn’t nice, they can read all this.

Katie and Carl met during lockdown

A fourth user wrote: “Very much doubt Pete allowed you to pay for everything. This is actually embarrassing, what are you trying to prove?”

Are you really as happy as you make out? It’s like you’re trying to make someone jealous.

And a fifth user speculated: “I think we all get that you’re happy and that Carl’s the one etc etc, but if you’re constantly posting things like this to have a swipe at your exes, are you really as happy as you make out? It’s like you’re trying to make someone jealous.”

Read more: Katie Price slammed by fans as she cuddles up to her new ‘designer puppy’

Katie is believed to have been dating former Love Island star Carl for around seven months now.

They met in lockdown and claim to have never spent a day apart since they first met.

Katie has reportedly now jetted off to Turkey

Prior to meeting Katie, Carl worked as a car dealer as well as appearing on several ITV2 reality shows.

Meanwhile, she has an additional two children, Jett, seven, and Bunny, six, from her third husband Kieran Hayler. It is believed she finalised her divorce with former stripper Kieran this year.

What’s more, new reports claim that Katie has jetted back to Turkey after several of her veneers fell out.

A source told The Sun: “Katie can’t leave it any longer, so she’s gone away with Carl to get her teeth sorted.

“She’s gone back to the same place that put them in earlier this year.

“It means she’ll have to isolate for two weeks over Christmas but she’s not bothered as she was looking forward to a cosy holiday at home with the kids anyway.”